With the temperature dropping to 31C, The Hungry Hikers chose a coastal path this week. We were walking by 8.30 at a relaxed pace, enjoying to the max the calm, aqua green of the ocean and the distant vista along the pure white sandy beach, to the northern end of the Gold Coast. 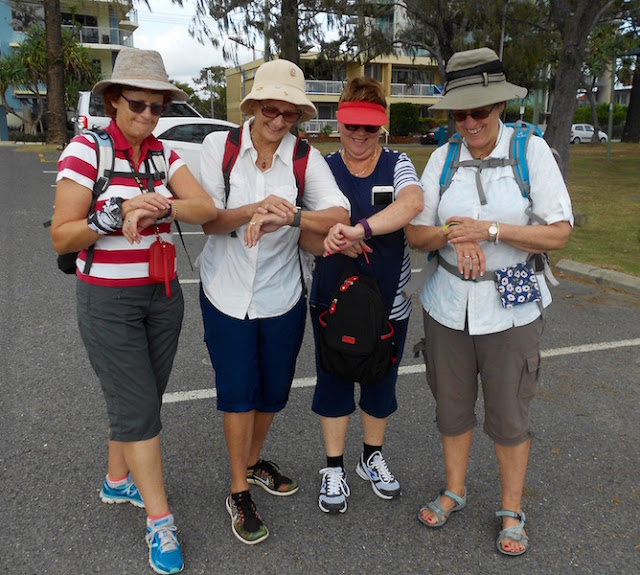 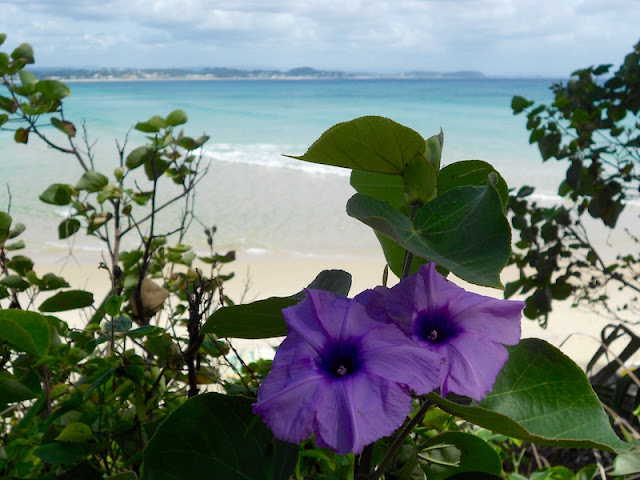 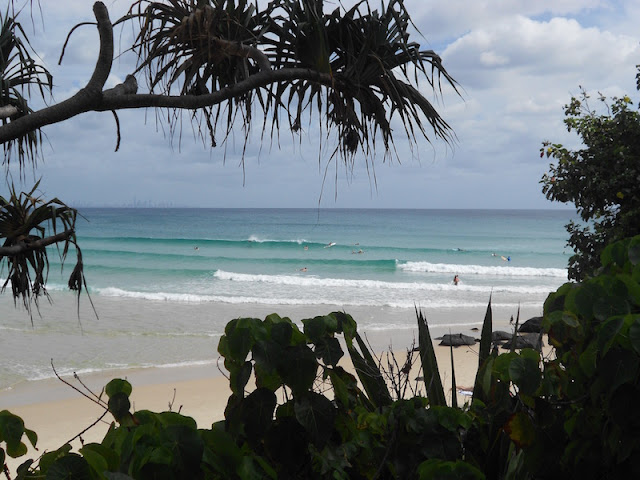 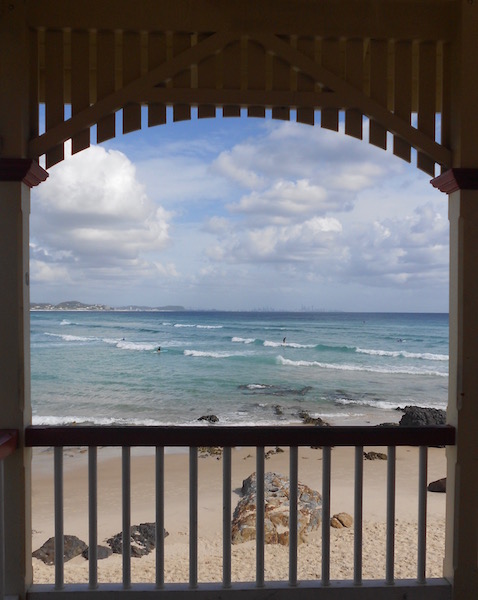 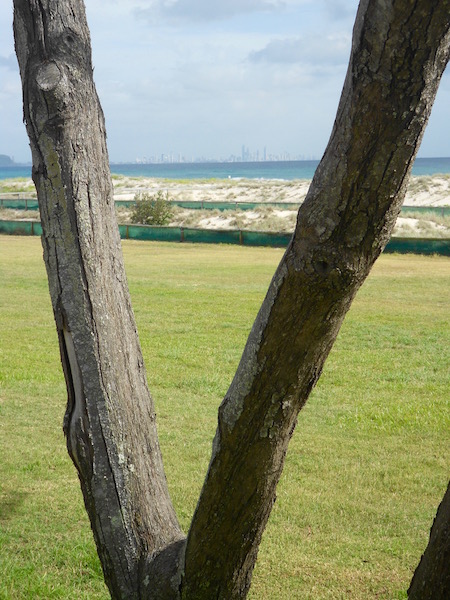 Below is google map of our 14 km return route.

White arrow - Snapper Rocks, where in early March, the Quicksilver and Roxy Pro world surfing titles will take place. Scaffolding for the event was already marring my favourite beach on the coast.

Pink arrow - Point Danger, named by Captain James Cook in 1770, on his journey of discovery up the east coast of Australia, to warn later mariners of dangerous coral reefs. It stands on the line of the Queensland / New South Wales state border. 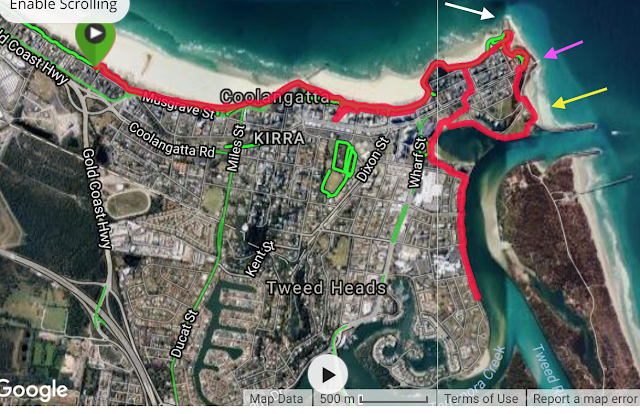 Duranbah and the Tweed River mouth from Point Danger. 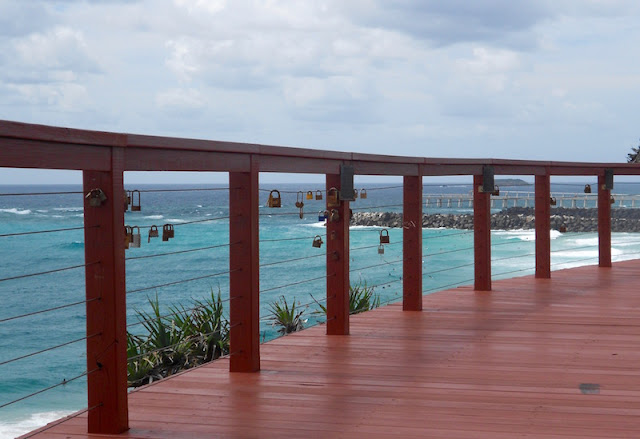 Flowerettes of the umbrella tree. I have just discovered it is classified as a weed. 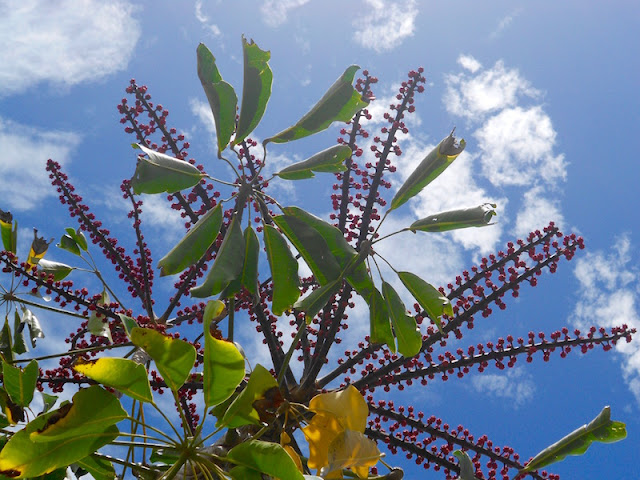 Snack time by the river. 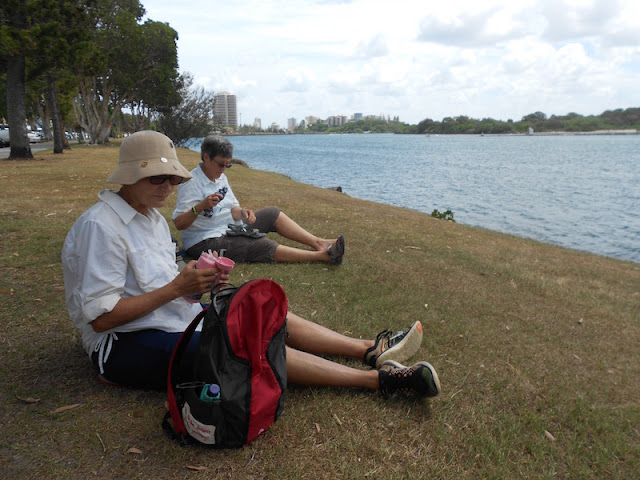 One of dozens of water dragon lizards seen basking in the sun. 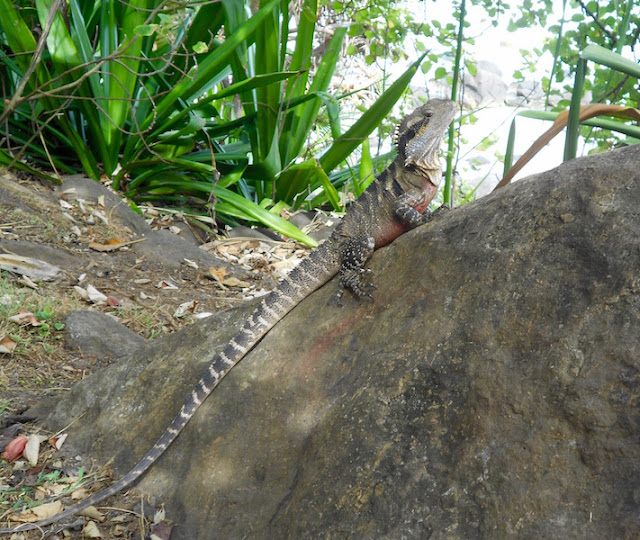 Today we didn't have to watch our footsteps for hidden roots, rocks, snakes or leeches, so the craziness factor of our group came into play.

'Koala with Attitude' sculpture, part of a trail to raise awareness of their plight, as more and more of their habitat is bulldozed for housing estates. A great capture by Joc, which exaggerates its size. 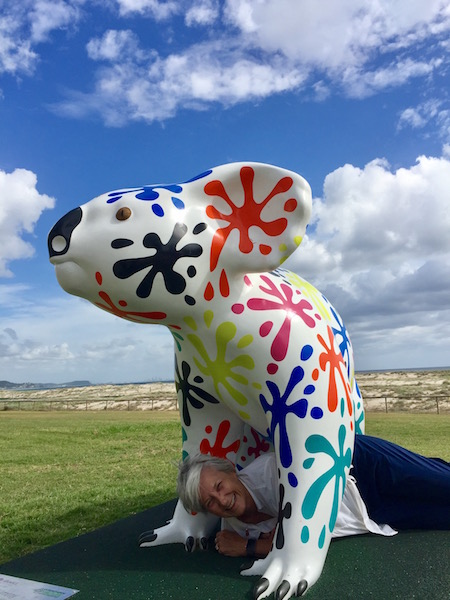 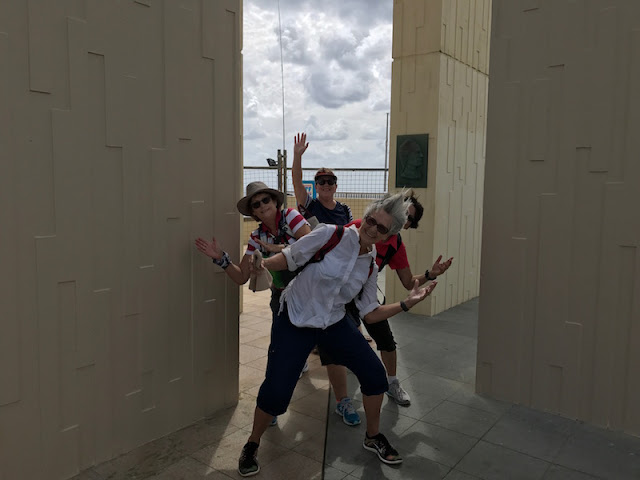 On our return journey we passed a happy group of chanting Hare Krishna. Joc waved to them and suddenly they took her hand , including her in the group. 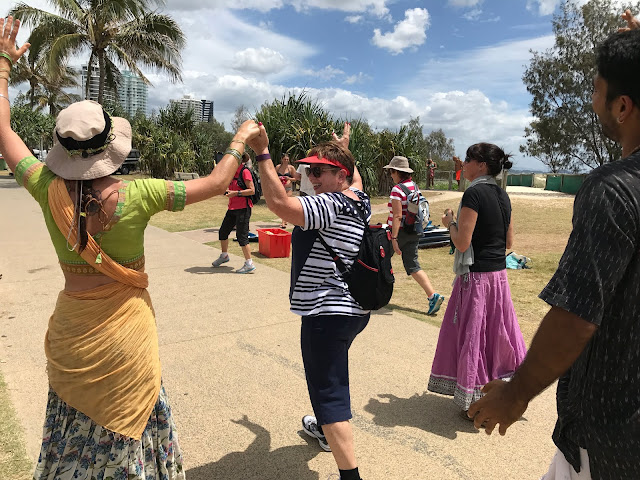 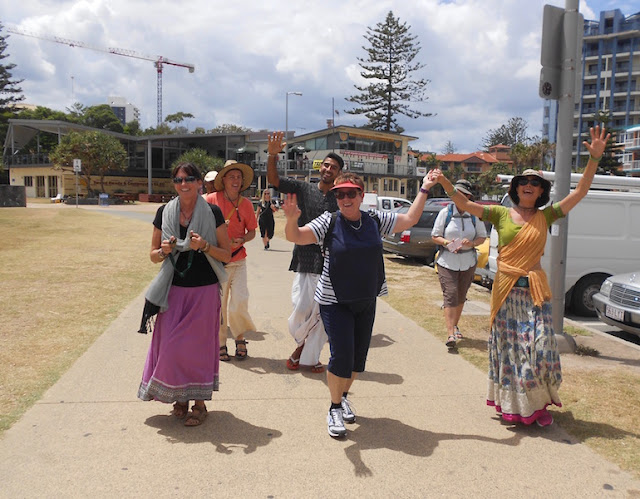 Laurel chose today's trail because she desperately wanted another exotic, 'Messina' ice-cream. Of course we didn't dissuade her. Laurel has the biggest smile. 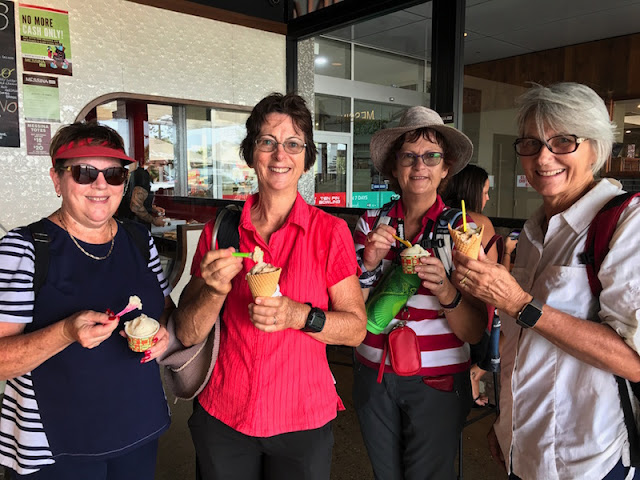 Yes, I think one could say 'we nailed this trail' today.
"Nailing the Coast" by Brad Jackson, is a sculpture of several large nails fixed into the earth at various heights and angles. [photo Laurel] 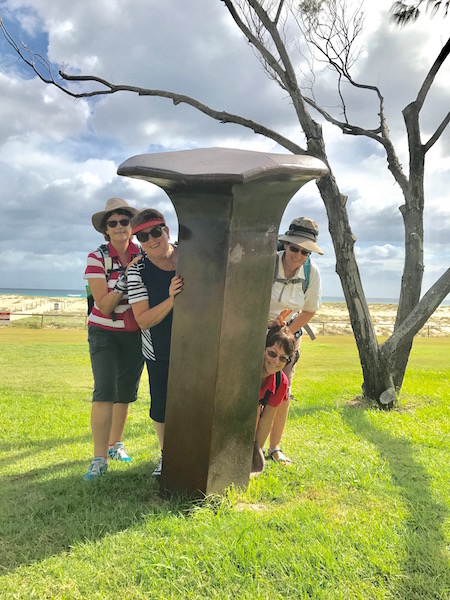 On Saturday morning, I took a drive with Laurel down through the cane fields, just 20 mins from my home, to participate in an hour of yoga by the tranquil waters of the Pimpama River.

The next 3 photos, taken on our journey home, comes with the title "Get me to the church on time!' 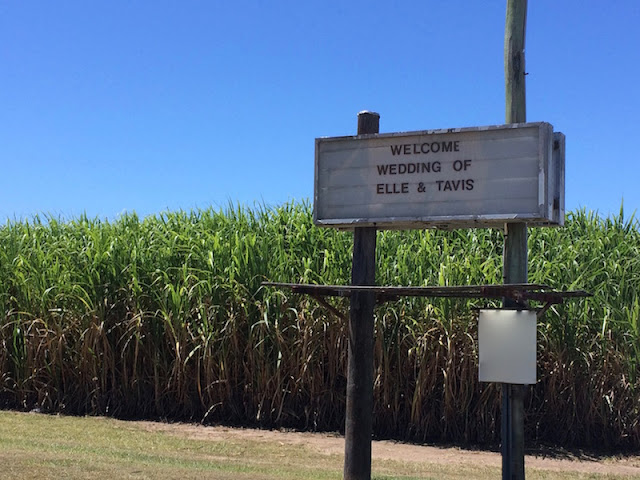 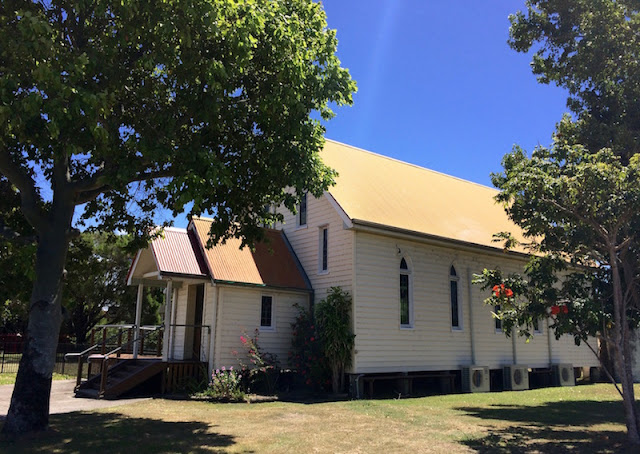 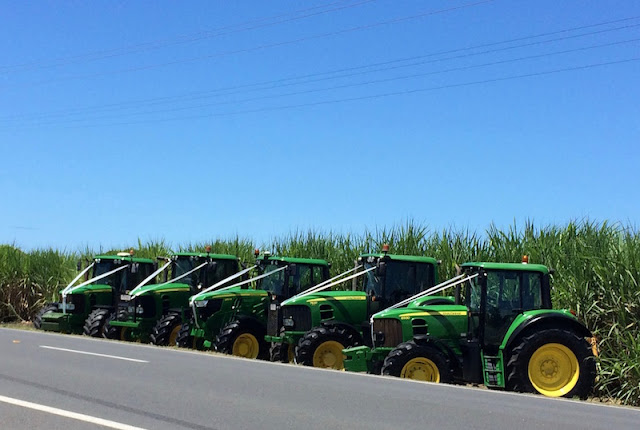 We assumed that the tractors were merely a guard of honour.

In a park near by, was this impressive eucalyptus [gum tree], whose beauty I just had to share with you. 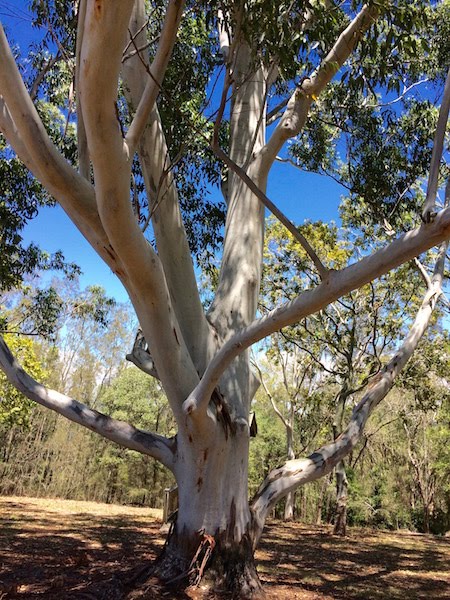 I would love to read your comment.
Posted by Helen at 13:18