It was wonderful that Covid numbers in Australia, allowed the return of full Anzac Day services and parades. Unfortunately, and in my mind disrespectfully, larger numbers were permitted to attend the various football codes in the afternoon, than returned service members and families were permitted to walk in the morning parades.

Last year, the Returned Services League promoted curbside dawn services, as all of Australia was in Lockdown. Families all over Australia stood with candles, in front of their homes at 5.30 am, and listened to the live broadcast from The Australian War Memorial in Canberra.

This was also promoted again this year. With a number of our neighbours, this was our chosen way to acknowledge those who had served, granting us the freedom we so richly enjoy each and every day. 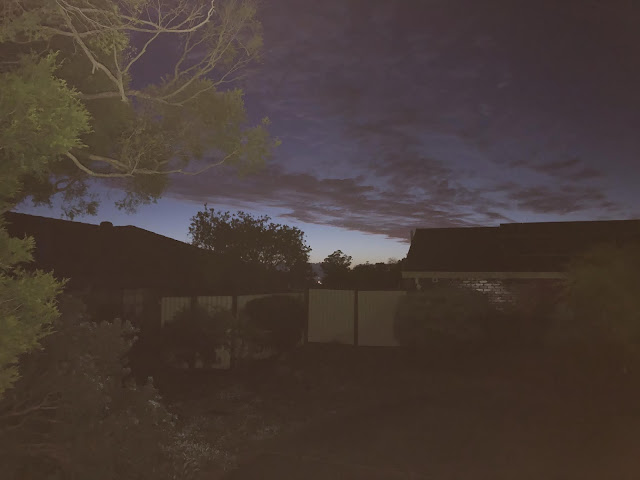 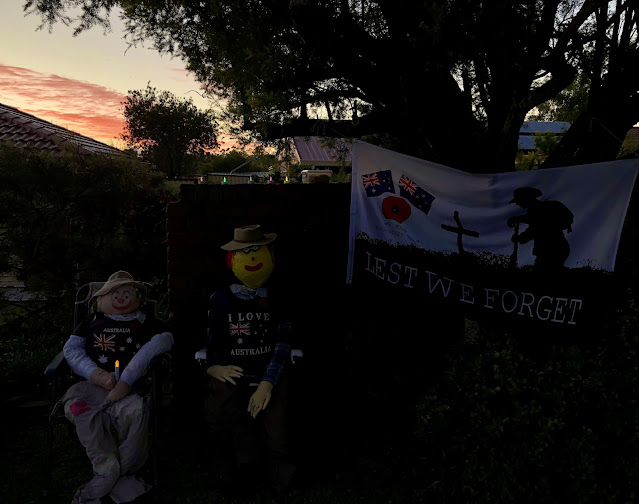 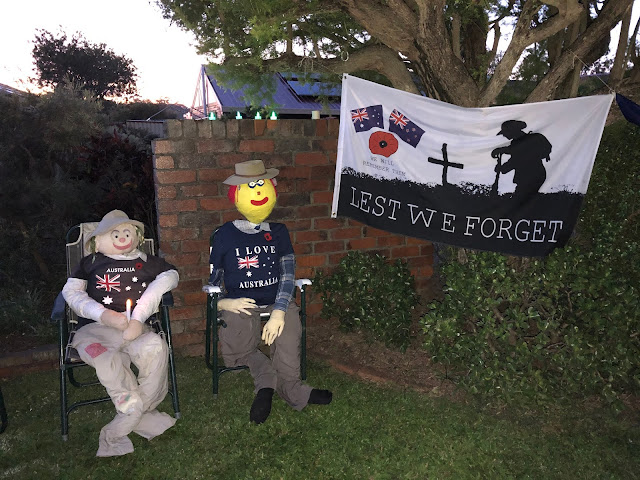 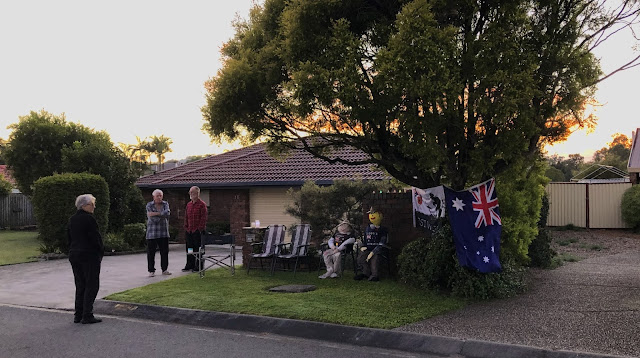 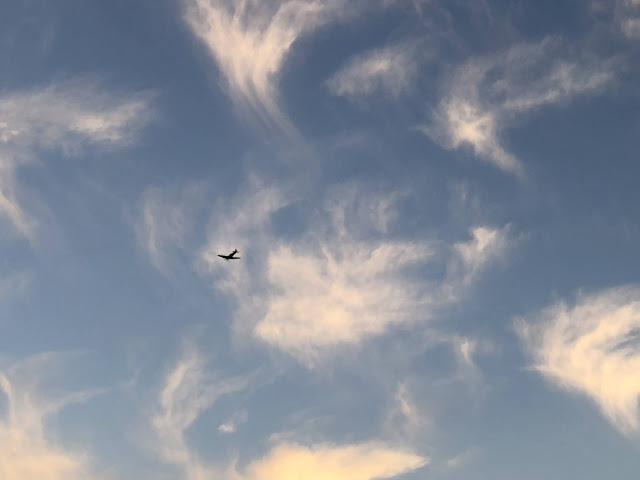 We have a wonderful historical village just a few streets from our home. Only a couple of days prior to Anzac Day, I saw that they had a special afternoon remberance event.
A group called 'The Spirit of the Red Sand' regularly perform a dinner and light show in the grounds.
["A cultural awakening of the history, beauty and vibrancy of the Aboriginal people"]
It was this group that organised the afternoon's proceedings.
I have to congratulate them on this very beautiful and moving event. In remembering the sacrifices of our brave men and women for our country and and freedom, there was a special message of place, belonging, pride and harmony.
Earlier in the day, a Maori group had set  a hangi. This had been lifted an hour before our arrival at 4.30pm, and had we wanted to, we could have ordered a meal. In the photo below you can see where the hangi had been lifted from and the Nunukul Yuggera Aboriginal group are seen preparing for the commencement of the ceremony. 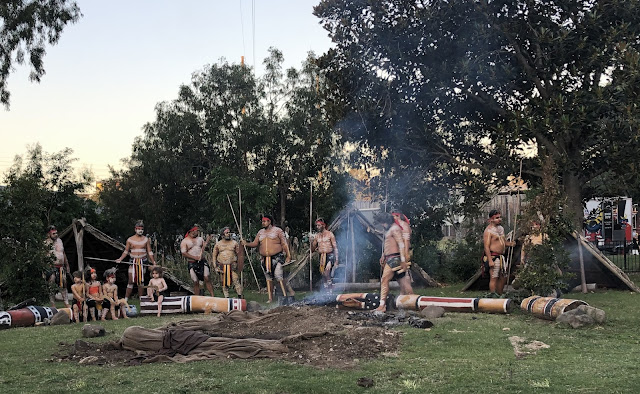 The formalities began with a very moving traditional welcome to Yuggera Country, including the challenge, presentation of the message stick and the smoking ceremony.
Below - The 'tribe' are rushing to challenge the people entering their territory.
Some 300 visitors had been asked to congregate at the entrance to their land.
A spine-tingling Haka [specially choreographed for Anzac Day, by the Te Tai Mauri performing group] was then performed towards the Nunukul Yuggera Aboriginal Troupe, who chanted in reply. 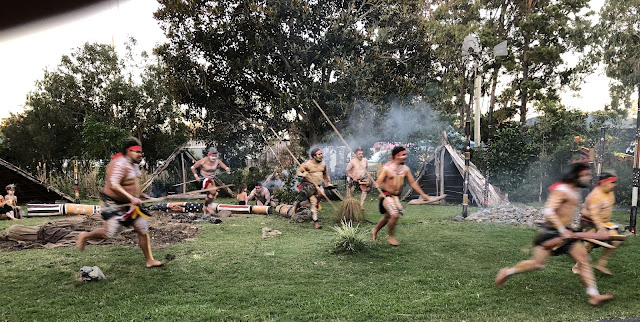 Then, led by the Aboriginal Elder and the Maori Chief, pleasantries were exchanged and a procession followed. This was through 'cleansing smoke' created by rubbing fire sticks to create fire, within a bunch of eucalpytus leaves, and then blowing, giving a constant cloud of smoke.
Guests slowly passing through the cleansing smoke.
Below -  The Elder and Chief are waiting to lead the guests through the 'corridor of time' to the stage area, that had been organised for the the Anzac remberance ceremony. 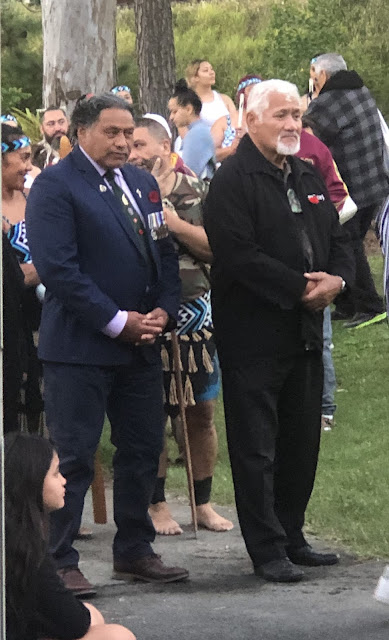 Below - The 'Welcome to Country' speech, accompanied by the sounds of the didgeridoo.
[Schools, weddings, forums, concerts and all public events now acknowledge the traditional owners of our land, at the beginning of any event. For more formal functions, a local indigenous person is invited to make the Acknowledgement of Country.] 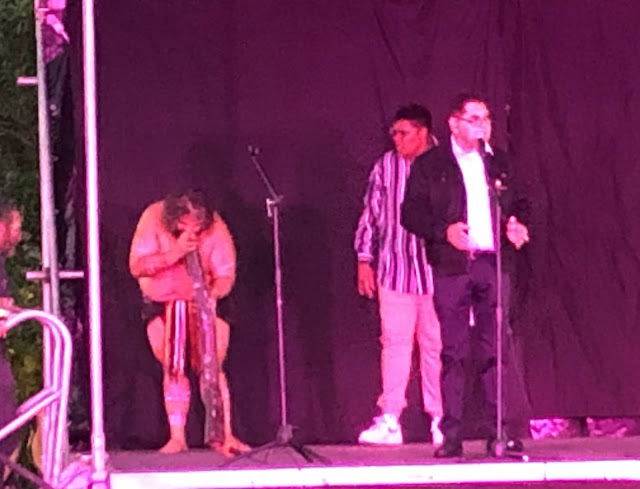 The audience then stood in solidarity, as the sun went down to the Retreat Bugle Call, joined by Aaron [above] on the didgeridoo. The minutes silence was accompanied by recorded sounds of the battlefield. Very, very moving.
Next we witnessed the passing of the flame [the Nunukul Yuggera again rubbed sticks to light the eucalyptus leaves] from one generation to another, and listened to the Anzac ode, as four flags were lowered, folded and passed to the next generation. This was particularly moving, as the Aboriginal flag was passed to a young Australian and the Australian flag to a young Aboriginal. Similarly with the NZ and Maori  flags.
The lowering of the flags. - Australian, Aboriginal, New Zealand, Maori. 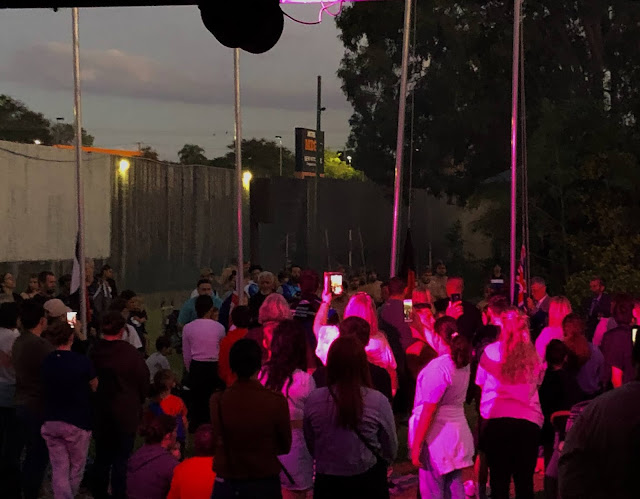 A selection of dances were then performed by the Nunukul Yuggera dance troupe and the Te Tai Mauri performing group. 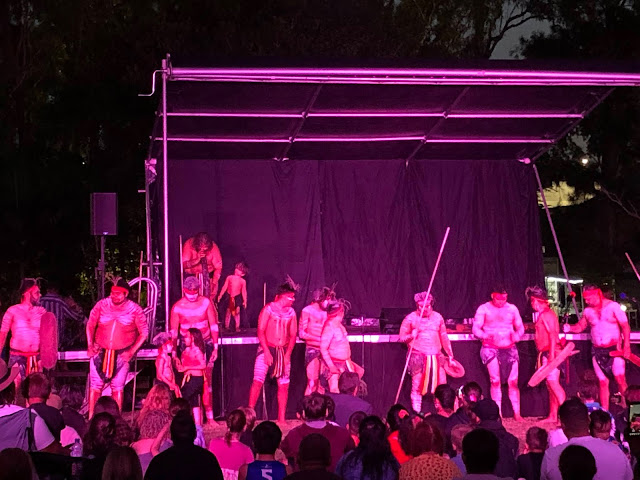 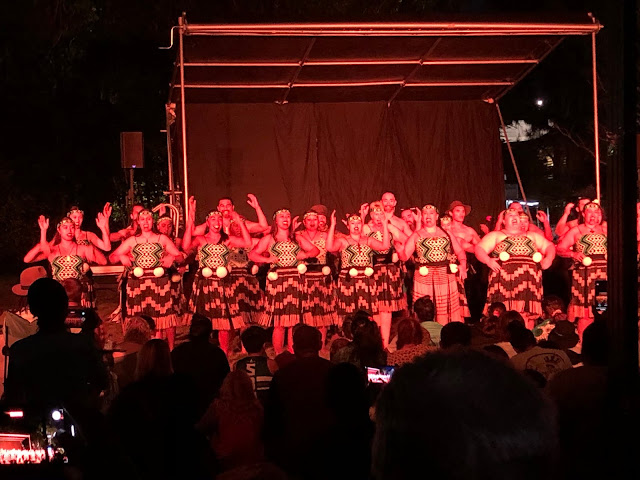 Finally, Victoria Tamaki paid tribute to the Andrew Sisters and Dame Vera Lynn, with her selection of songs. 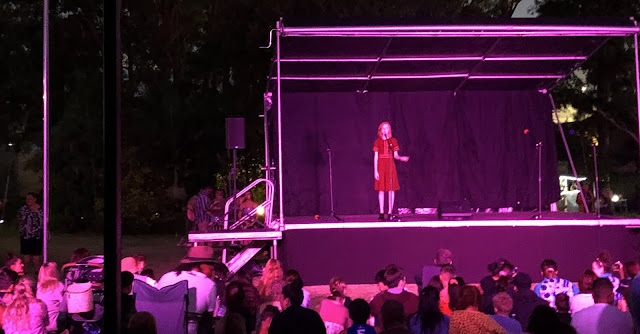 An absolutely wonderful afternoon, "Lest we Forget".
I would love to read your comment.
Posted by Helen at 16:24