Thankfully this day dawned dry, after a week of drought-breaking rains. I was visiting my brother, who was down from north Queensland and staying at Alexandra Headlands on the Sunshine Coast.

On this occasion, he really wanted me to climb Mt Timbrogargan with him, but I knew its steep, rocky face was not for me, so I suggested the 3 peak adventure. 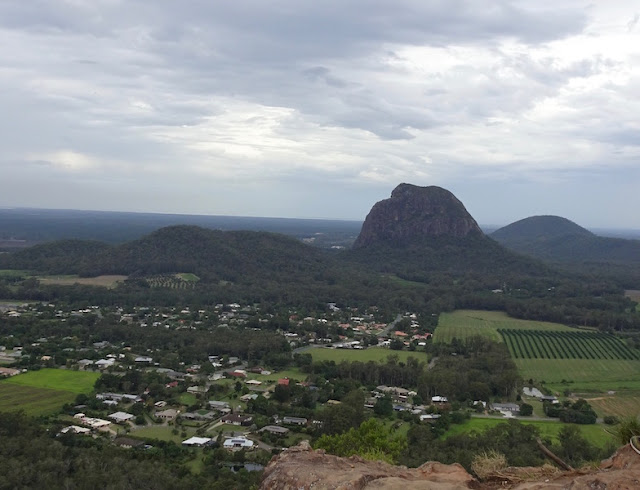 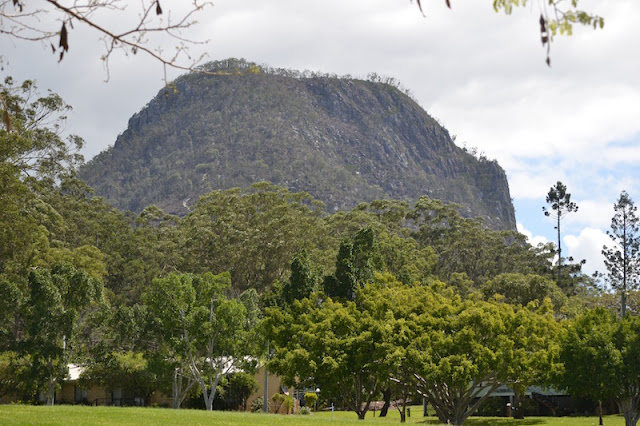 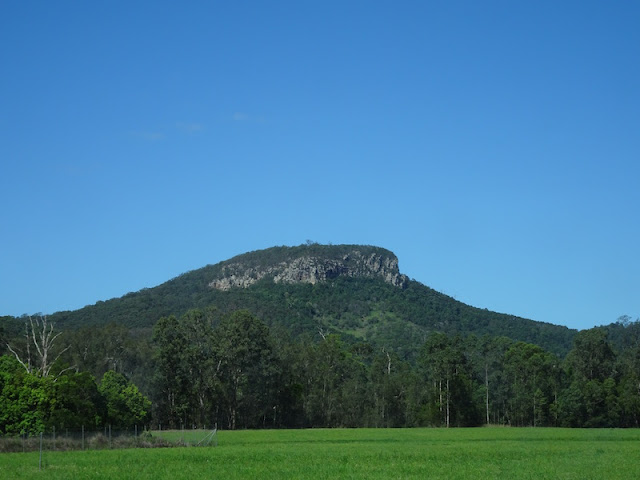 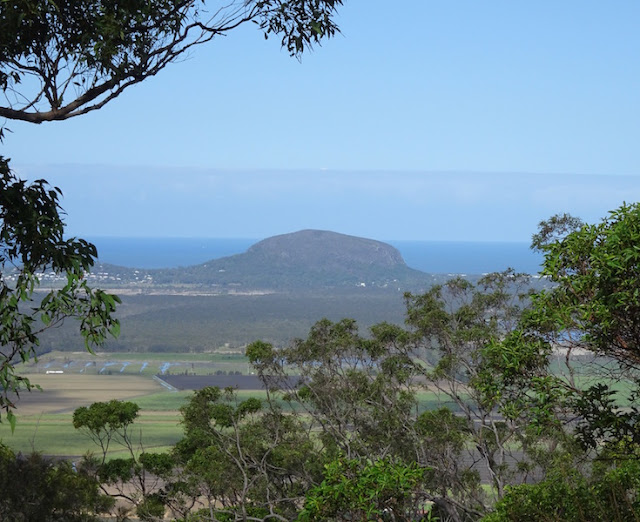 Ninderry [2] and Coolum [3] as seen from the top of Cooroora. 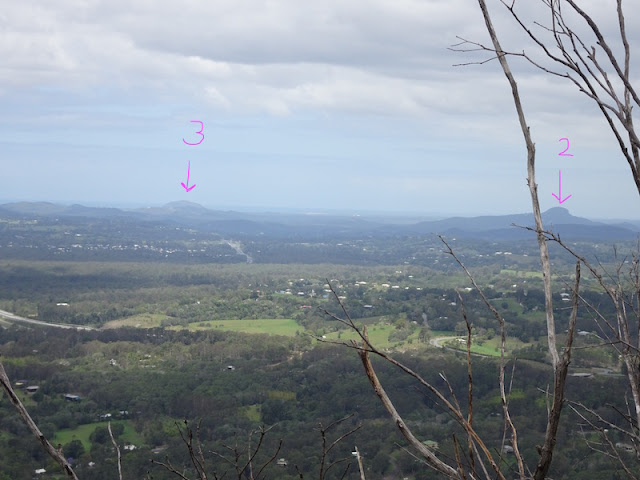 One third of the way up Cooroora, the hard work began. A series of concrete, rock chiselled and metal stairways tried to ease the hard work, with a chain fence to grab adding a sense of security. The last 30m was an open rock scramble but the summit although narrow, was level and presented fantastic 360 degree views. My photos don't show the degree of difficulty. Few were taken as I needed to concentrate on where to stretch my legs to next. 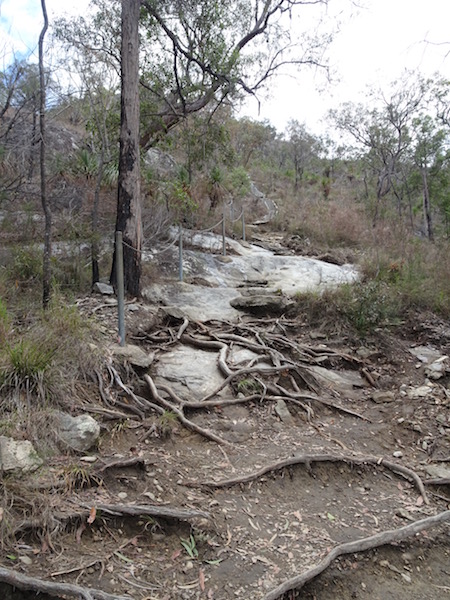 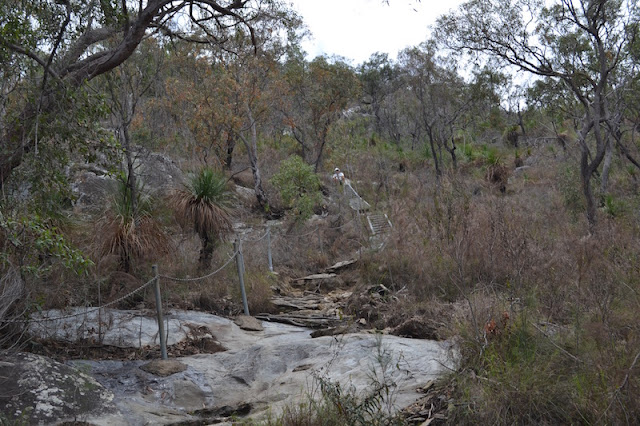 A gentle section. Time to breathe. 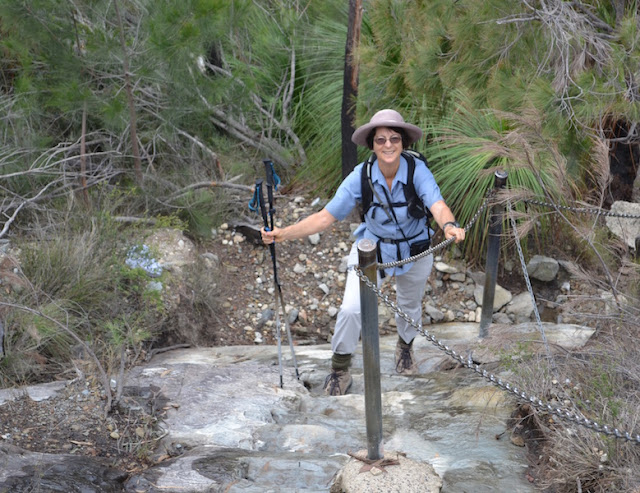 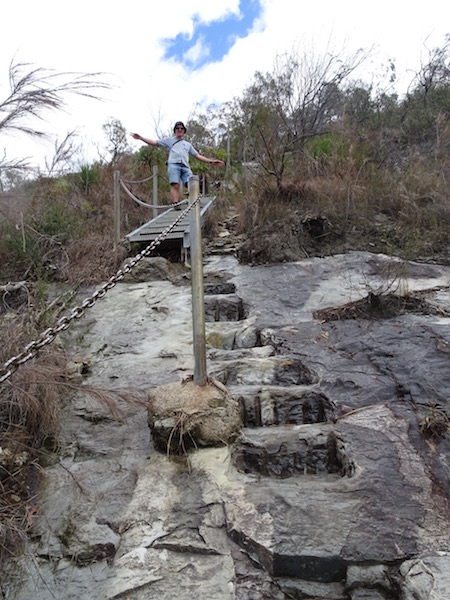 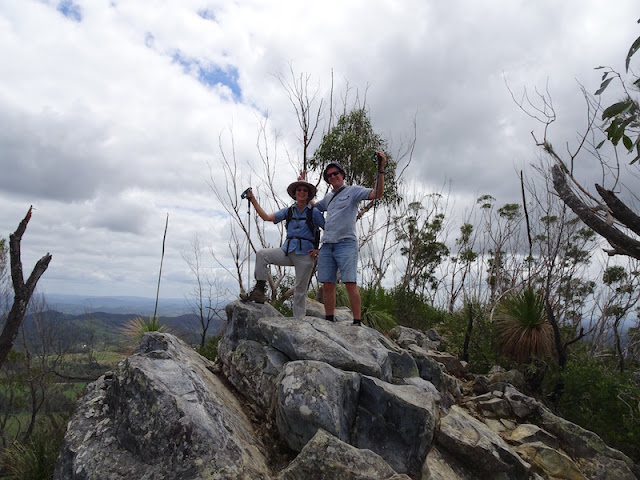 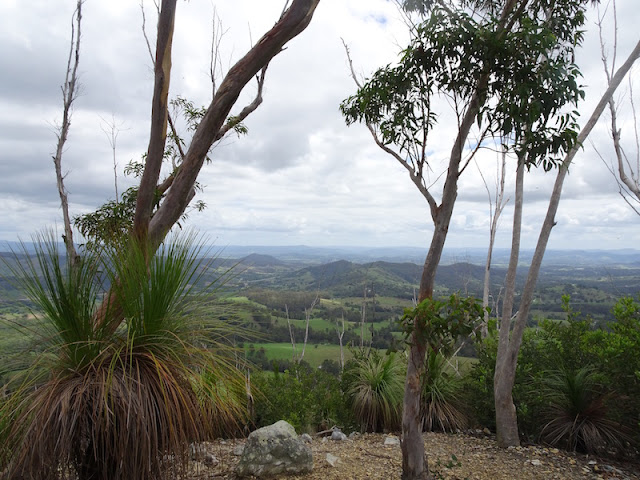 We found Mt Ninderry a gentle climb. Lovely wide path, gentle gradient, and far fewer rocks. The views were limited, but I loved the patchwork of the farmland. 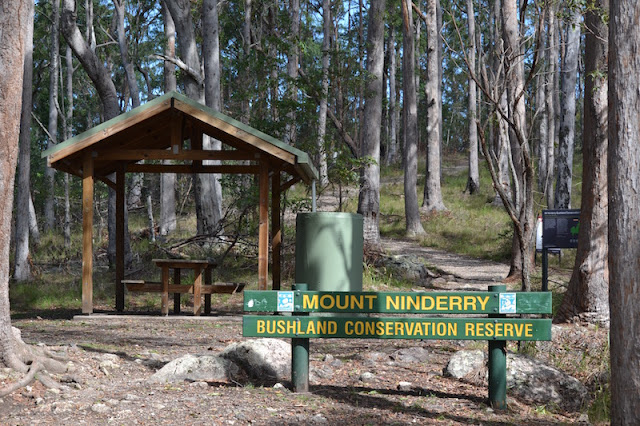 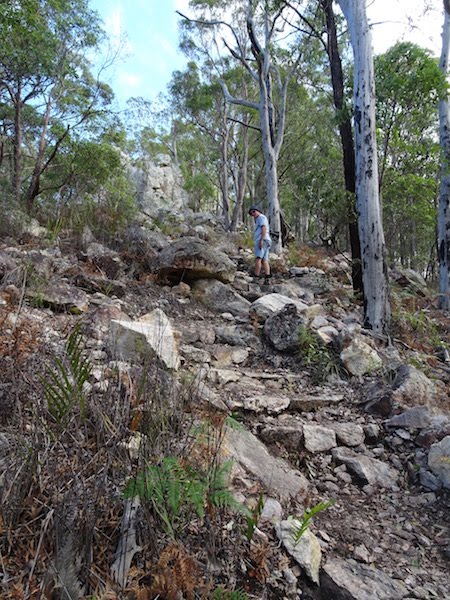 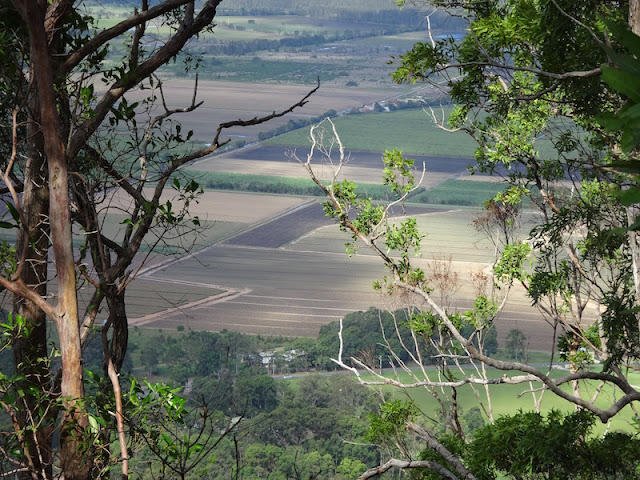 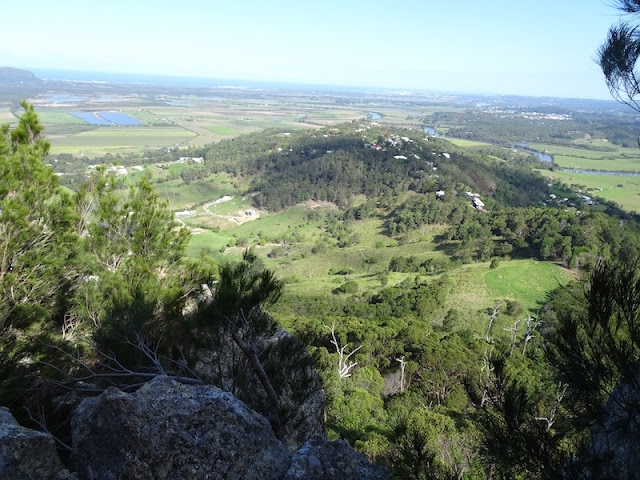 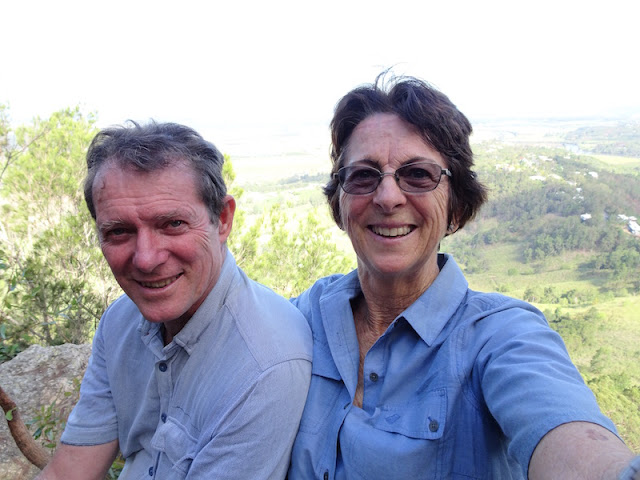 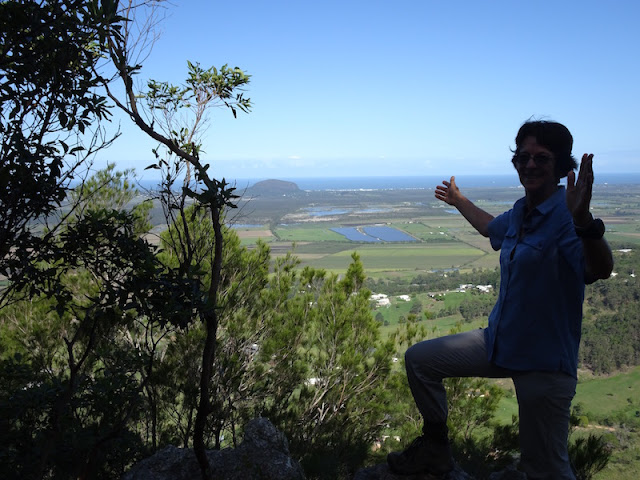 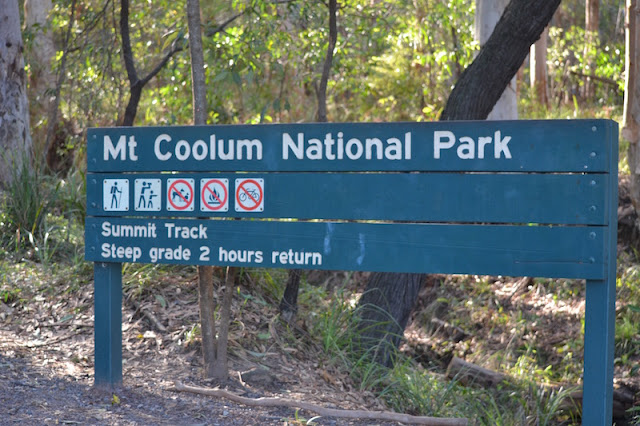 This wasn't the first time Jim and I had climbed Mt Coolum. Back in the early 70's we had climbed it with our now sister in law, Dot. Our ascent then was on a very poor trail up its western face.  Now the ascent is from its eastern face on a still steep, but beautifully rock paved, stepped path. It took us half an hour to the summit. I imagine that on most days, it must be as busy as a motorway. We were fortunate in our timing.

Yet again the views were amazing, especially in contrast to the lack of development we saw on our first climb. [ I haven't changed a bit!] 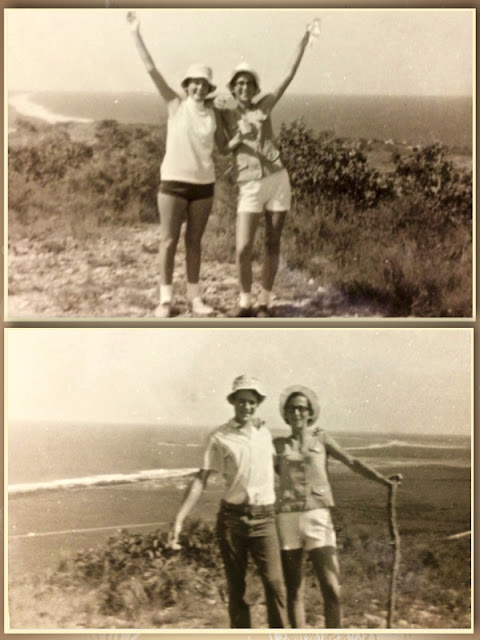 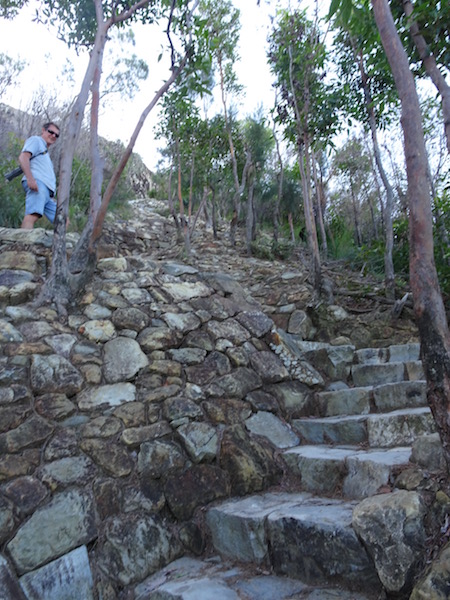 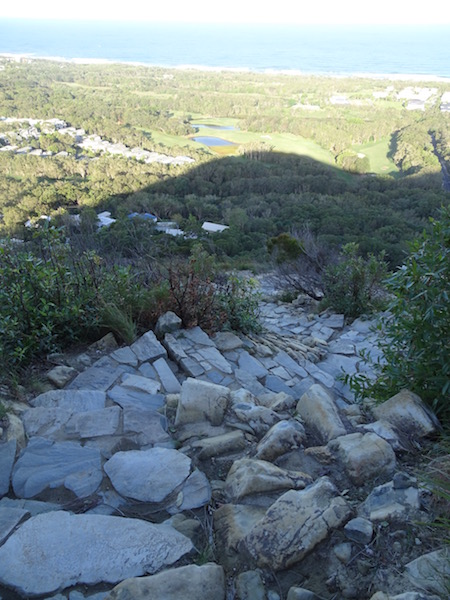 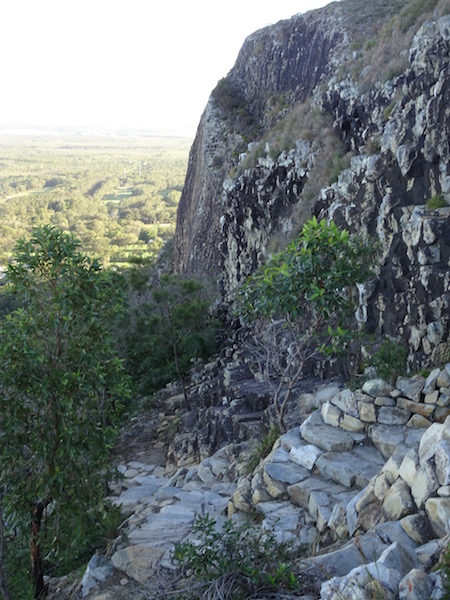 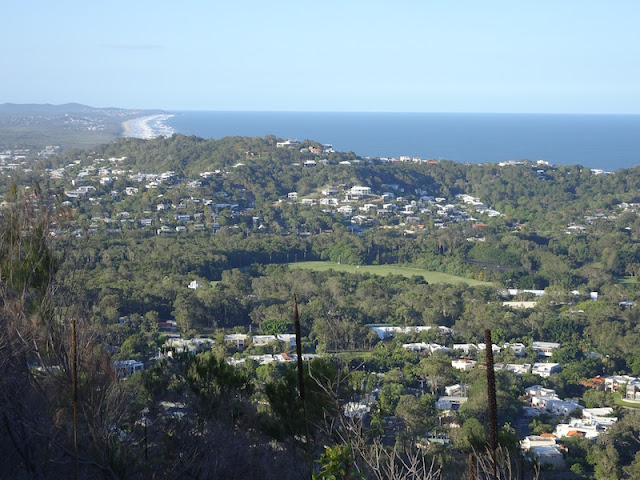 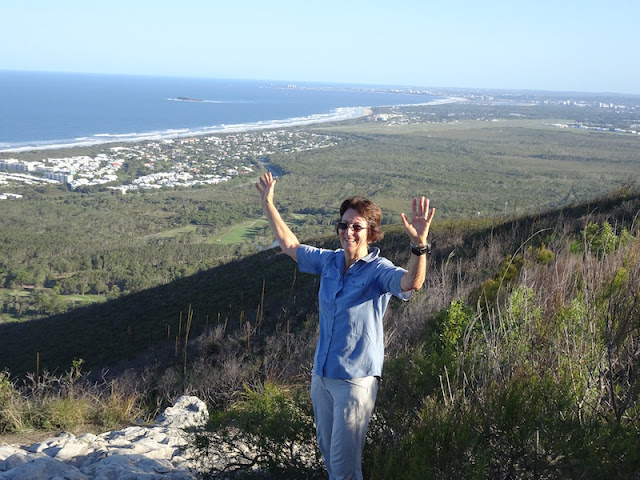 We were feeling quite excited about our achievement as we made the 20-minute drive back to Alexandra Headlands, top centre of the above photo.
Twelve hours later it was raining again and our planned hike cancelled. I woke feeling fine. By evening it was a different matter. I don't know if hiking the following day would have made a difference, but I do know that my thighs complained bitterly for the next 5 days. After driving back to Brisbane in the late afternoon, it was with great pain and difficulty that I extricated myself from the driver's seat!

Monday evening, I had a phone call from Jim. He had taken himself to Mt Tibrogargan and was humbled by its rock face. His body froze halfway up and a passing hiker had to guide him back down. He was shocked and so disappointed that this had happened to him.