An hour's journey, on a midmorning bus, took us back through Lago de Landro to Dobbiaco, one of the main gateways to the Dolomites and just south of the Austrian border. Situated in the open, lush green valley of the Alta Val Pusteria, the views were less towering and dramatic than what we had been experiencing, but still made music for my soul. 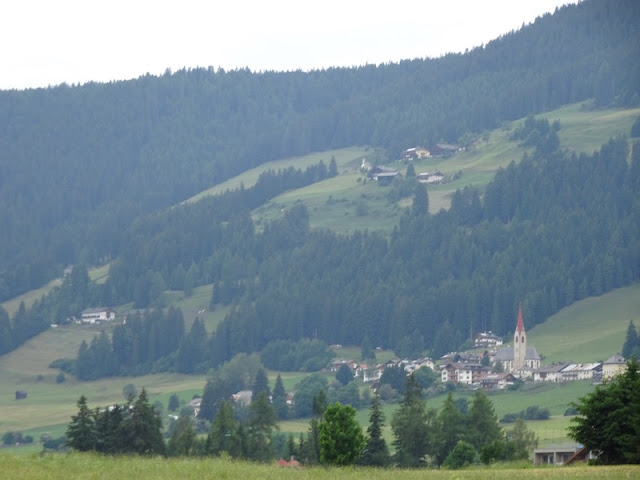 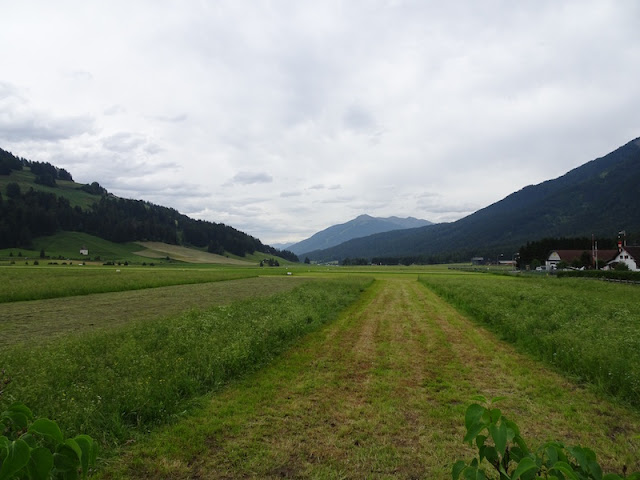 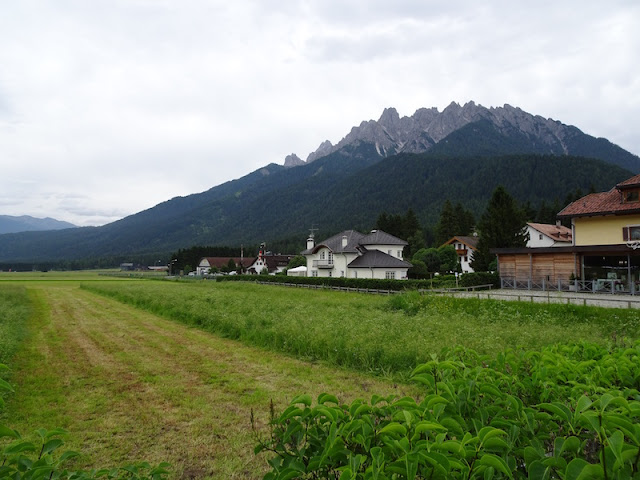 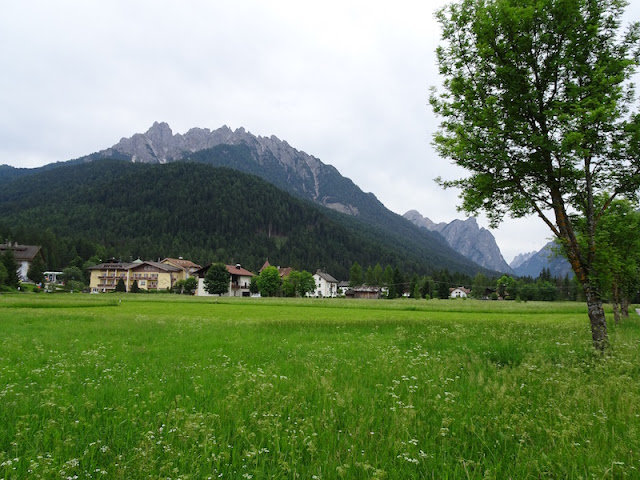 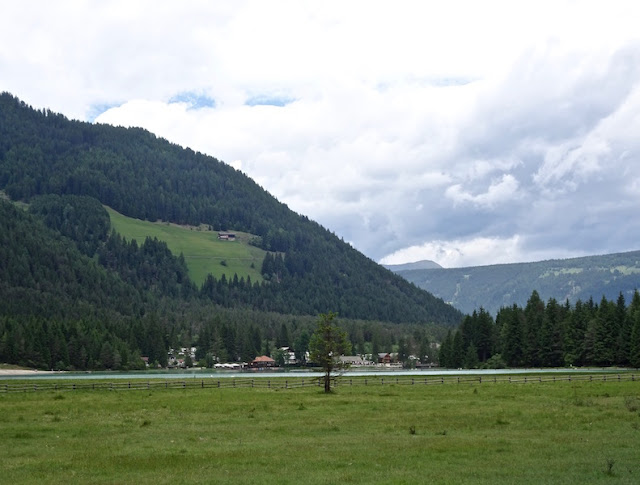 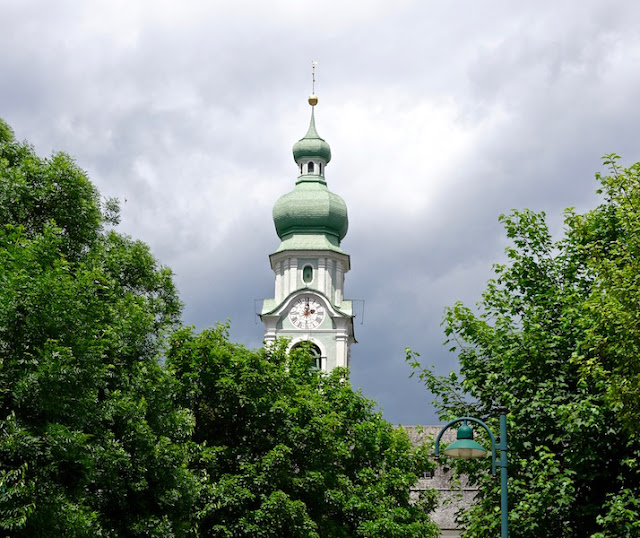 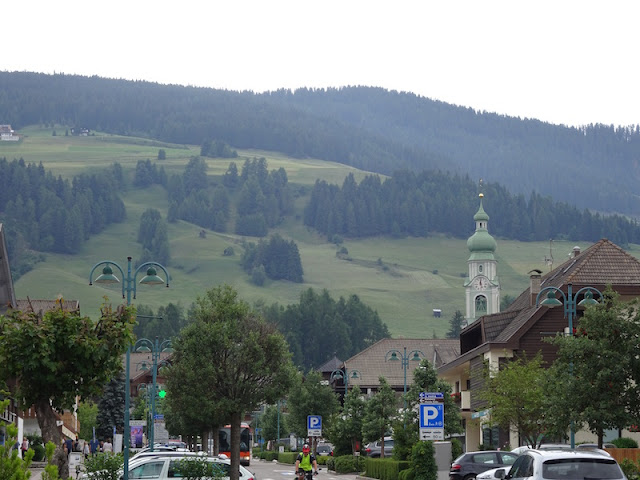 As mentioned in my previous post, this area of Italy has had quite a tumultuous existence in the early 1900's. Although now belonging to Italy, German was the language of Dobbiaco.

"For more than three years, hundreds of thousands of Italians and Austrians clung to the rocky peaks of the Dolomites and attempted to blow each other off the mountains in a bid to gain territory. The most that either side moved was a few kilometres backwards or forwards; the cost was 689,000 lives on the Italian side alone.

Both armies hauled huge pieces of artillery equipment up the mountains and built barracks on the summits to house the troops – many of whom died of hypothermia or avalanches before the snipers could get them."

Alas, this period wasn't the only time that armies argued over who would rule. 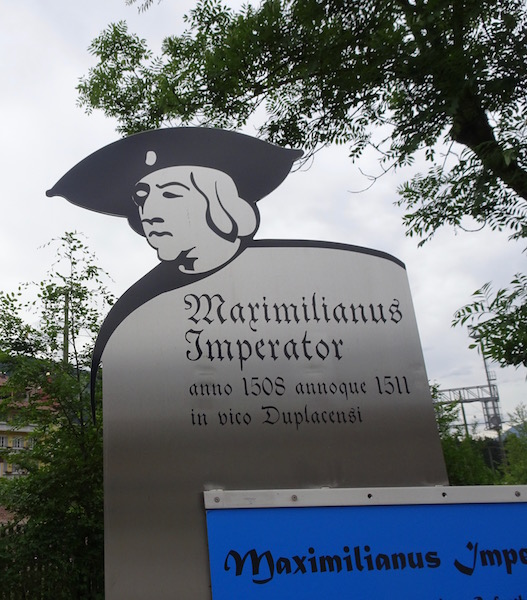 Our bus pulled into the railway station and we assumed that this was where we had to alight. We discovered that the main town was a couple of kilometres further, on stretching along a main thoroughfare. The above views greeted us so we weren't unduly upset. In fact, it was to our advantage. Not long after the bus departed the railway station stop, Frank realised he had left his red cap on the bus seat. This cap has a travel history and he was most upset with his carelessness.

Walking along the main street to the town centre, we not only spotted our bus driving towards us, but Frank's red cap was sitting against the windscreen in front of the driver. We waved. The driver stopped and the red cap continues to make travel history! Thank you bus driver!

Frank seen holding on tightly to his adventuress cap. 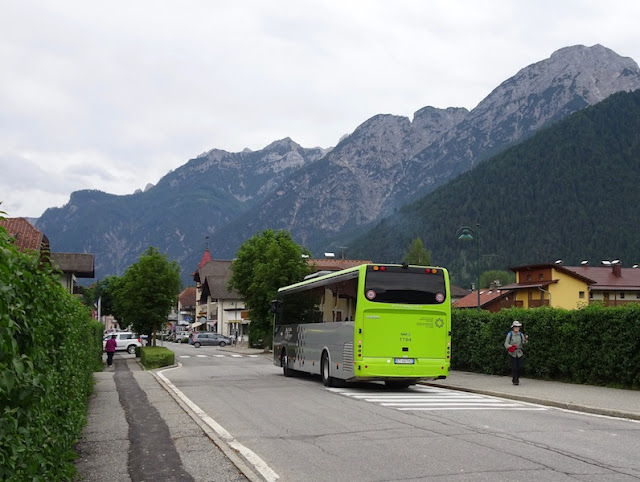 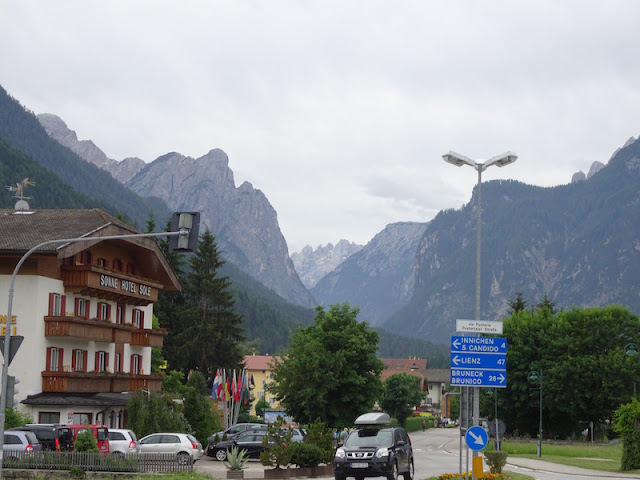 After a relaxed stroll through Dobbiaco, we retraced our steps back to the railway station and then continued on a path through fields to the pretty, emerald green, alpine lake of Toblacher See or Lake Dobbicao.

I found this farmhouse we passed, quite impressive. 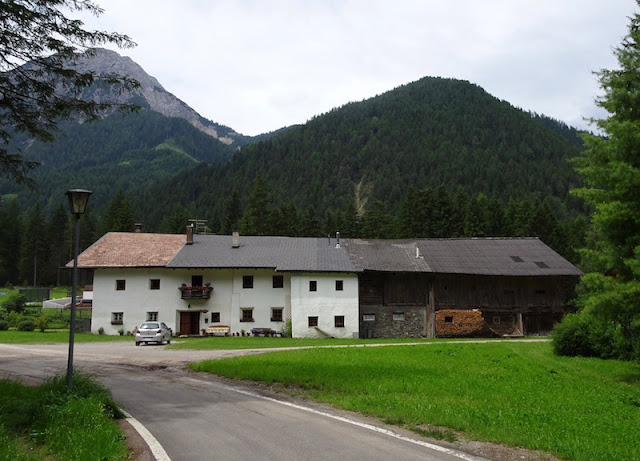 The tranquillity of the mountain reflections, wildflowers and birdlife was quite perfect, as we strolled  the path circumnavigating the lake. 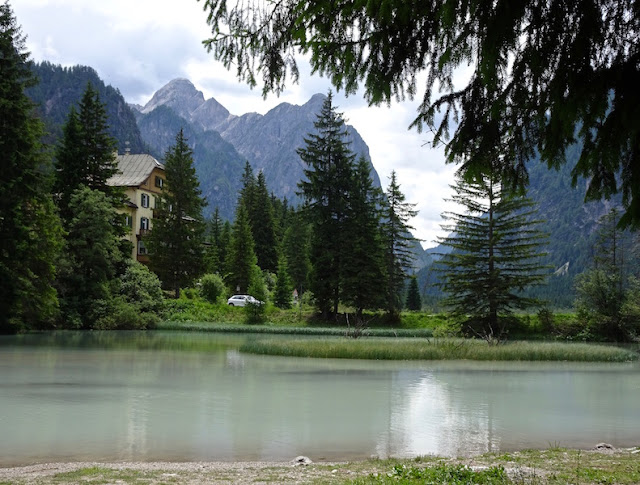 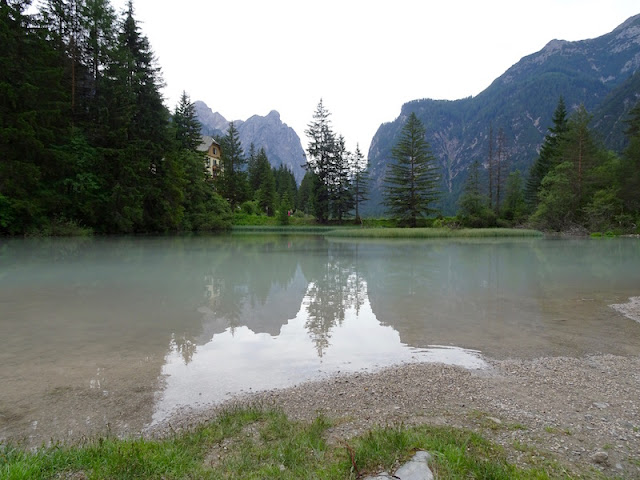 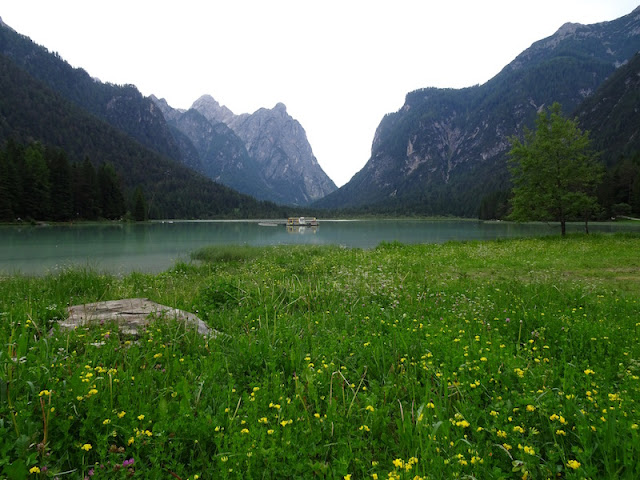 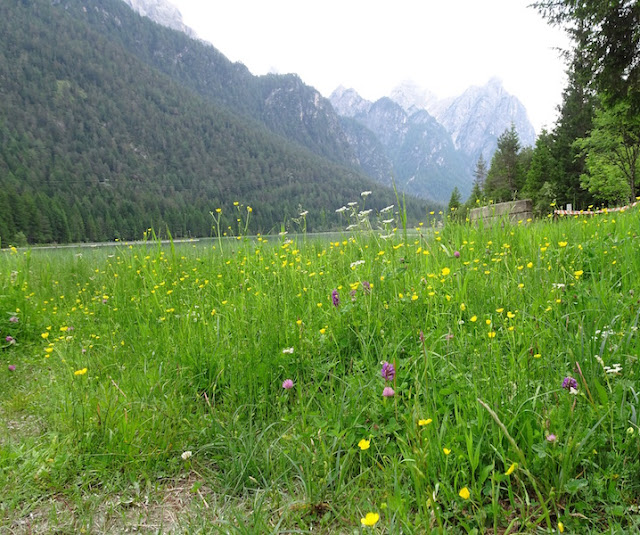 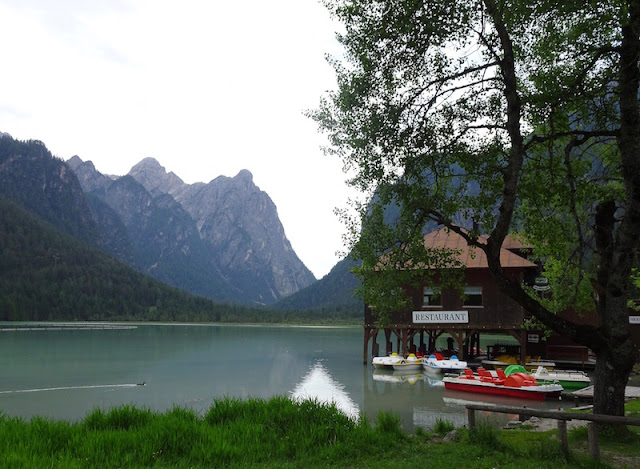 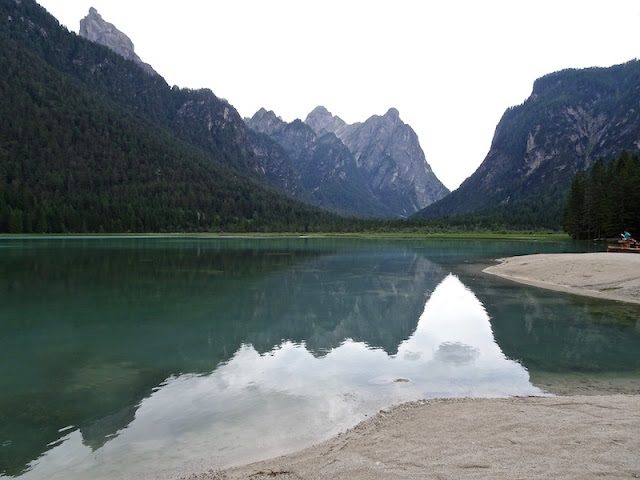 Sadly our amazing holiday was drawing to a close. Saturday 8am, saw us climbing aboard the Cortina express coach down to Venice.

View as we climbed aboard at the bus station. 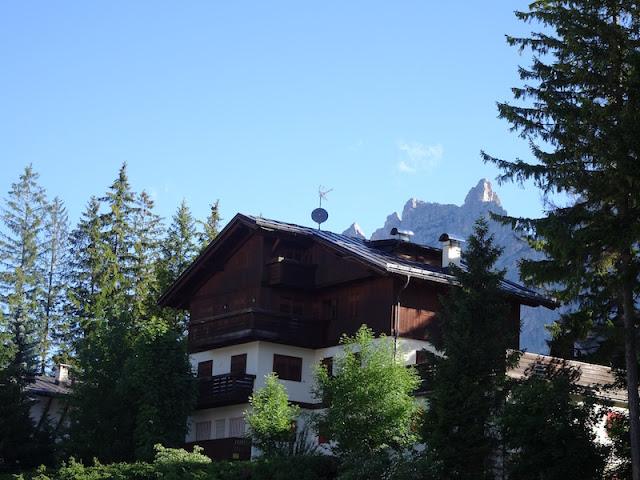 Views from the bus on the journey. 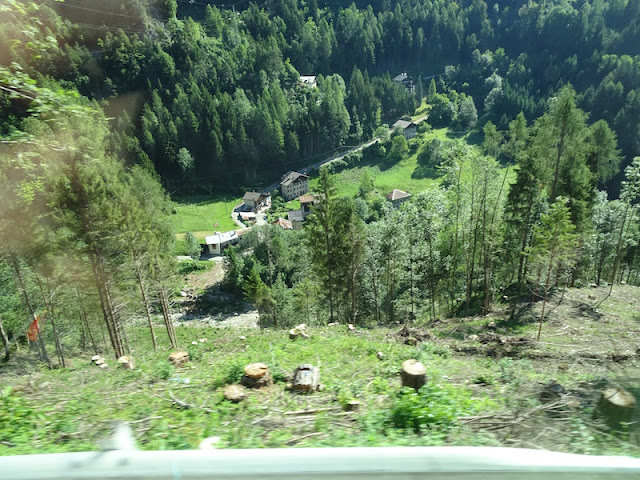 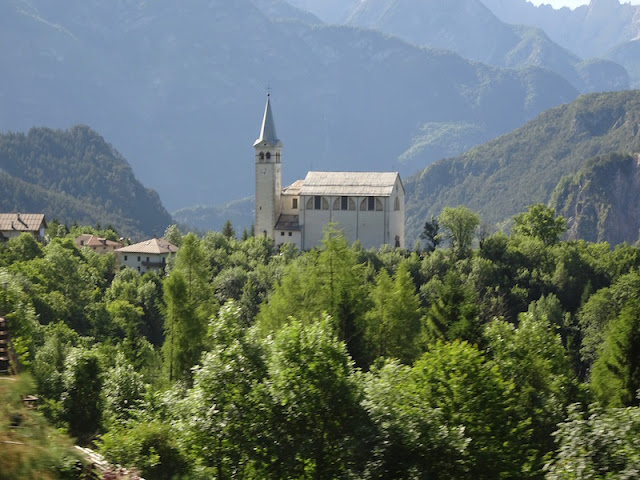 Our Venice to Milan train had us in Milan's 32 C heat by 3pm. Thankfully Frank had found accommodation for us, just across the square from the station. Later in the afternoon, we took the metro to Duomo Square. The crowds were huge and the queue for tickets to the cathedral looked hopeless. Someone rated us as 'seniors' and unknown to us until later, we were given priority ticket access.  The ticket vendor was quite adamant that we use the lift to the Cathedral rooftop and not climb the 247 steps. It was soon after, that the penny dropped as to what had occurred.
Yes, we are seniors and yes, we did climb the 247 steps and yes, we were stunned by the architecture, sculptures and views that greeted us. 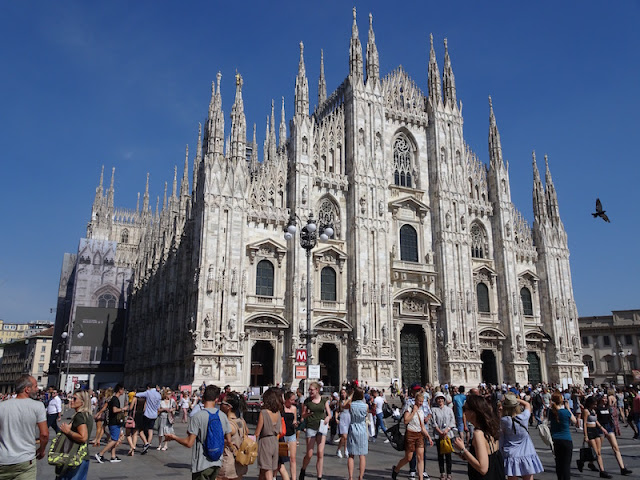 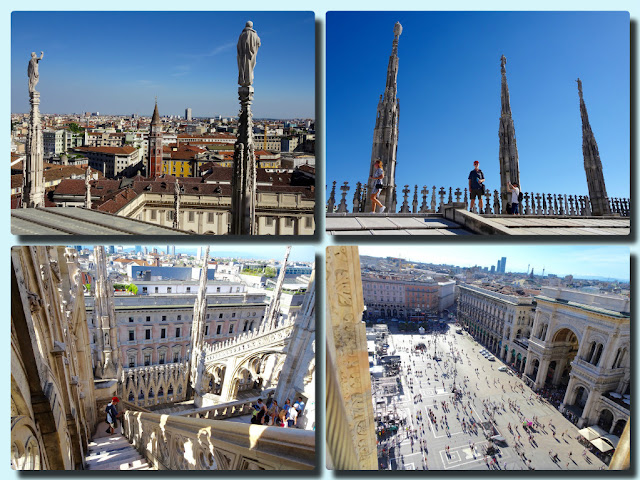 From the Duomo Square, we took the via dei Merchant towards Milan Castle, Castello Sforzesco.
Access was free to the complex and gardens, but its 7 specialised museums were, of course, closed at the time we arrived.

"Originally a Visconti fortress, this iconic red-brick castle was later home to the mighty Sforza dynasty, who ruled Renaissance Milan." 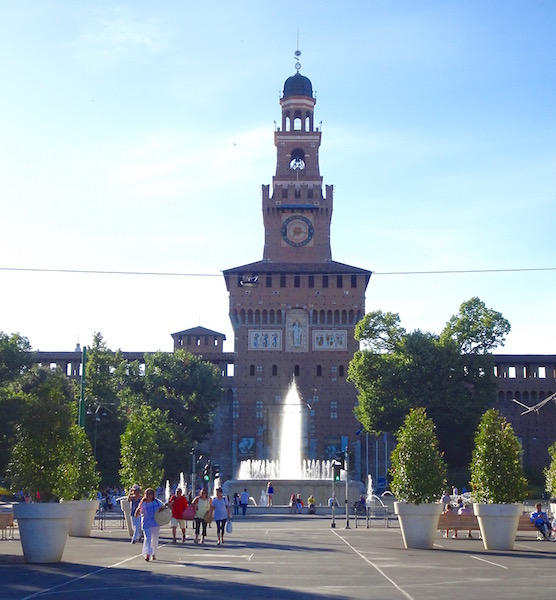 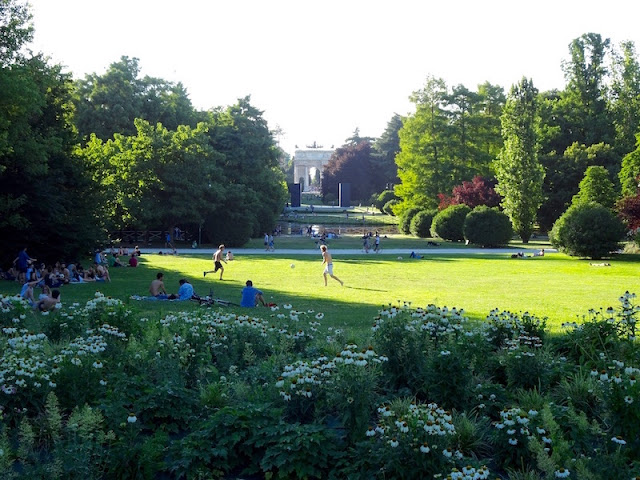 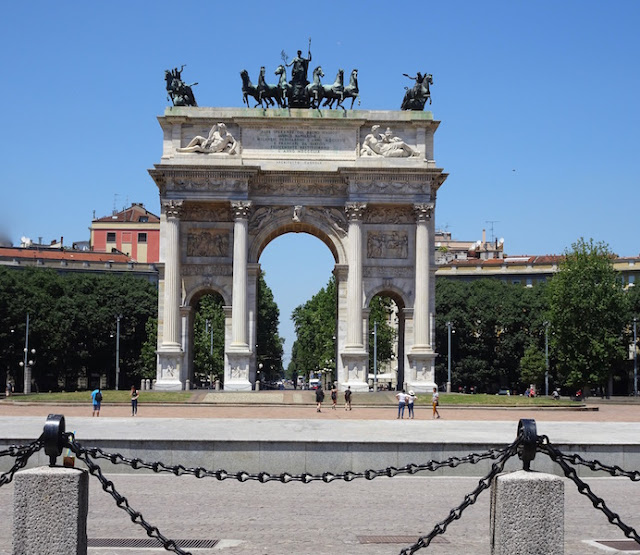 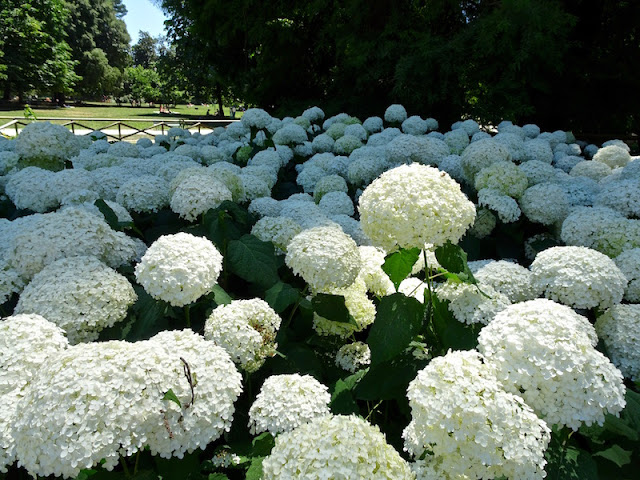 How wonderful is this age of digital photography? Our incredible holiday had come to an end, but the memories can be on our computer or TV screen, as often as we want.
Hopefully, you have enjoyed reading this blog, as much as I have in writing it. It was a truly sensational holiday, with wonderful weather. When researching and planning an itinerary, one constantly thinks, "Wow, I hope I see 'it' looking like that!", but fully realise the chances of it being so, are not great. How fortunate were we, that on this trip, just about every day was an amazing 'wow day'!

I would love to read your comment.
Posted by Helen at 13:06