Our camping trailer / van, had been sitting in our garage, for far too long. My husband has back and neck issues and as we are travelling overseas in October, he was reluctant to chance triggering the pain. He gave me his blessing to venture off with friends.

This was to be my maiden journey, towing the van and being fully in charge of reversing into the site and setting up. I was extremely nervous, until I did a pre-departure practise. My friend's Jocelyn and Leanne, also new to the caravaning life, were full of encouragement and help. I chose a camping ground where I knew the ground would be level - very important for my debut. I am delighted to report that all went smoothly and within an hour and half of pulling into the park at Fingal, we were relaxing with a much deserved coffee and cake, enjoying the million dollar view of our site. The spell of Fingal began to weave its magic, with its pristine beaches, aqua sea, glorious sunshine, sunsets, sunrises, dolphins and whales. 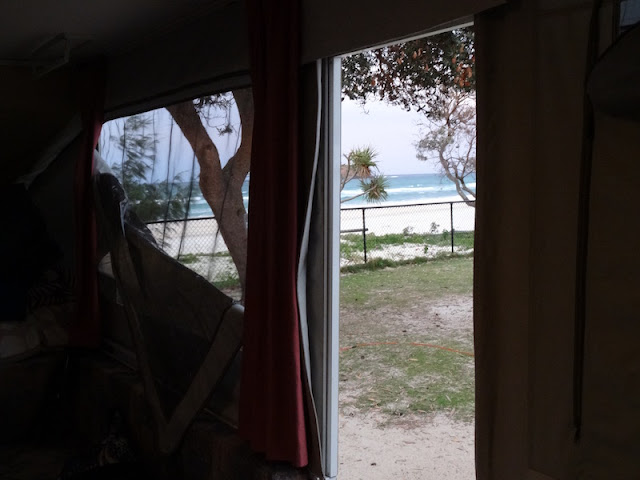 Jocelyn did the final check of the directions and gave us the thumbs up! 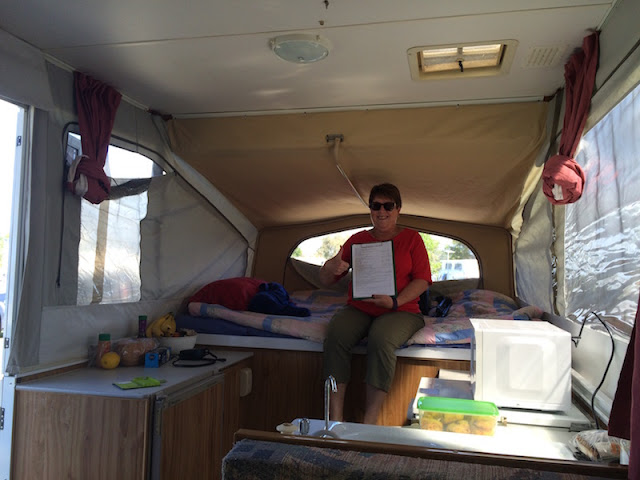 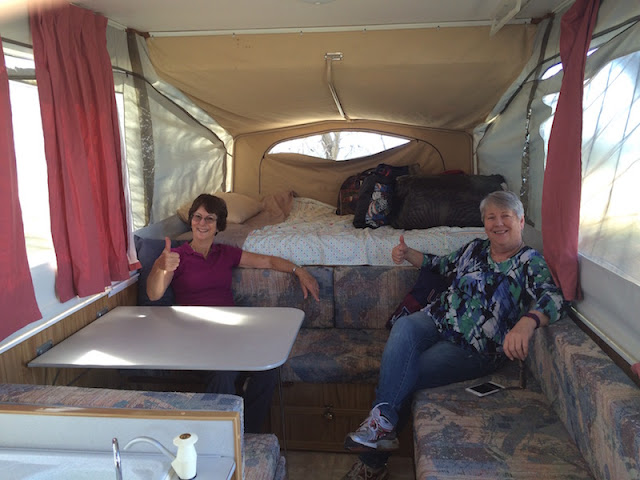 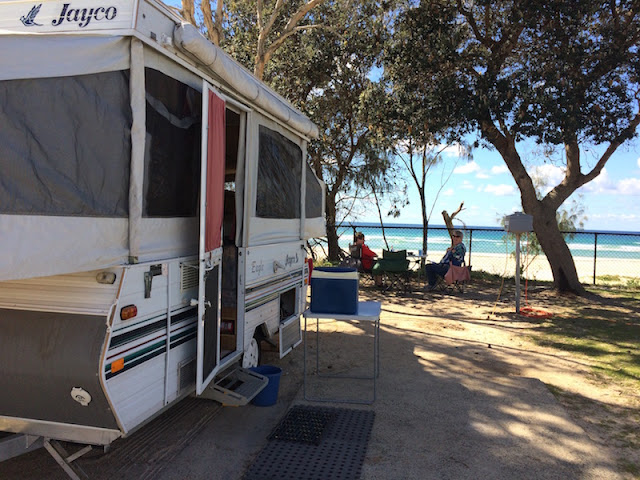 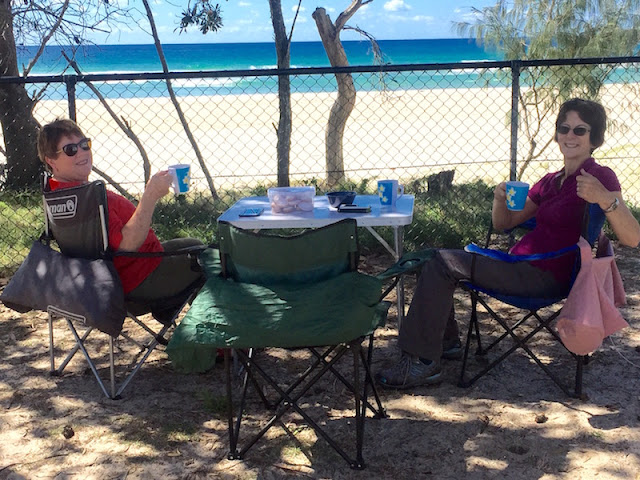 Feeling re-energised, we took a stroll along the beach to the headland and the Giant's Causeway - a crescent-shaped mass of hexagonal coloumns, formed when the lava flow from Mt Warning, rapidly cooled in the ocean currents.
Looking back to the caravan park and Tweed heads. 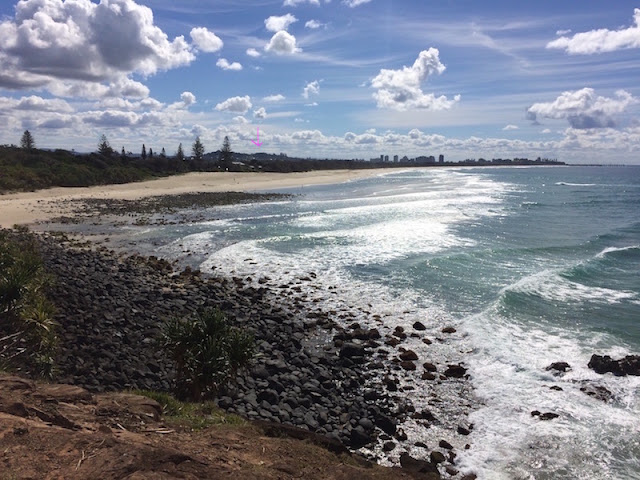 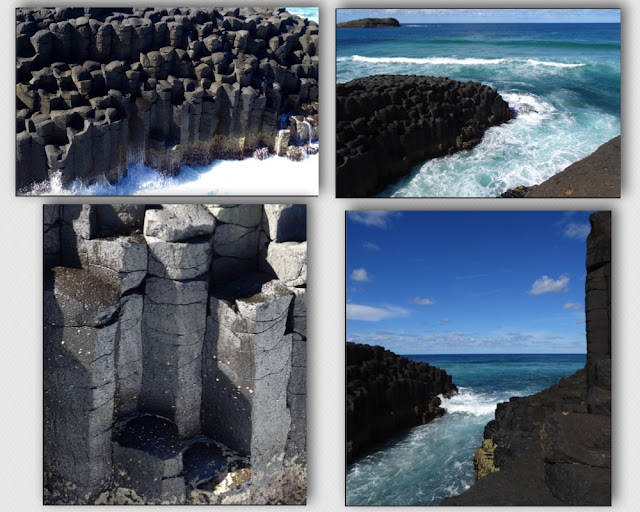 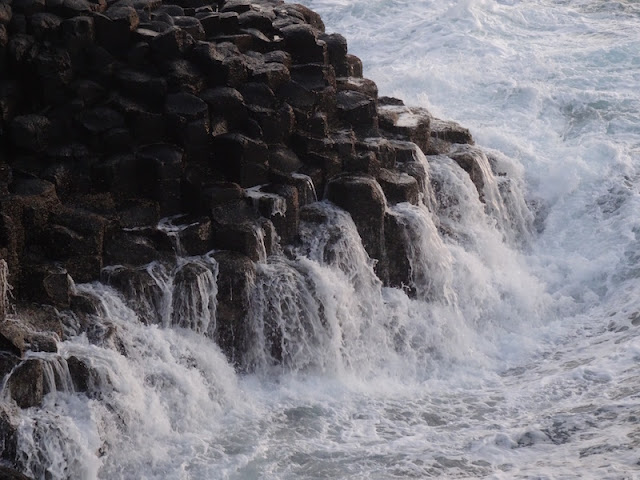 The headland was a wonderful place to be, with its views to Cook Island and the hundreds of seagulls nesting there. Vibrant yellow, paper daisies caught our attention, as did the amazing table setting, overlooking the next bay. 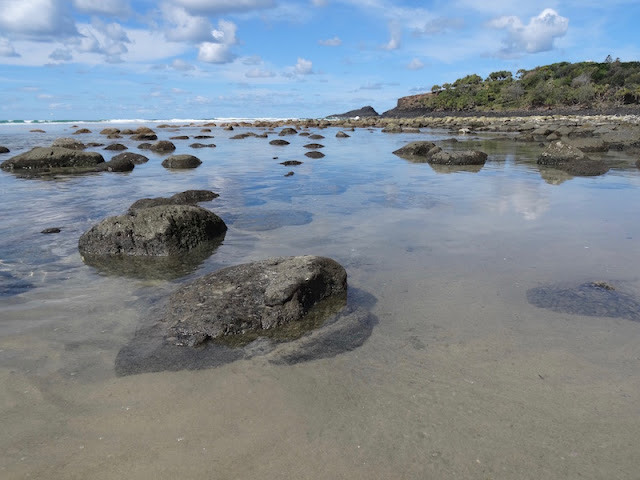 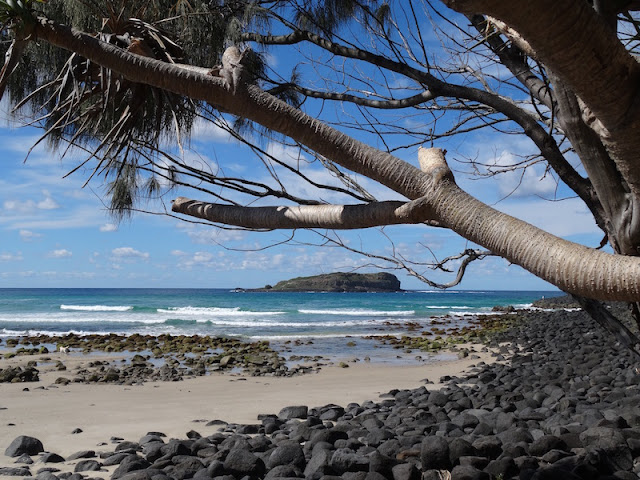 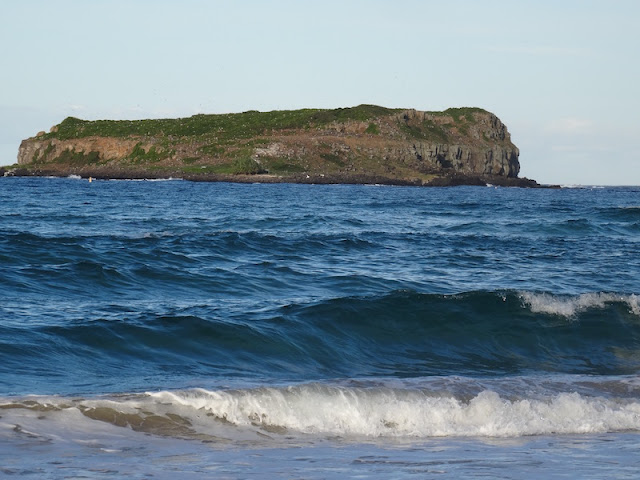 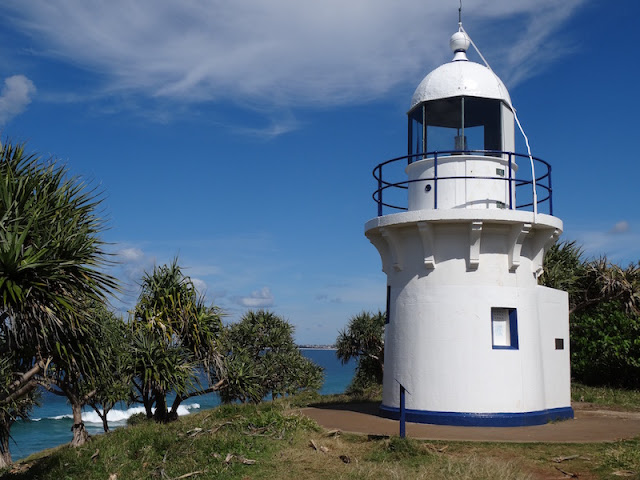 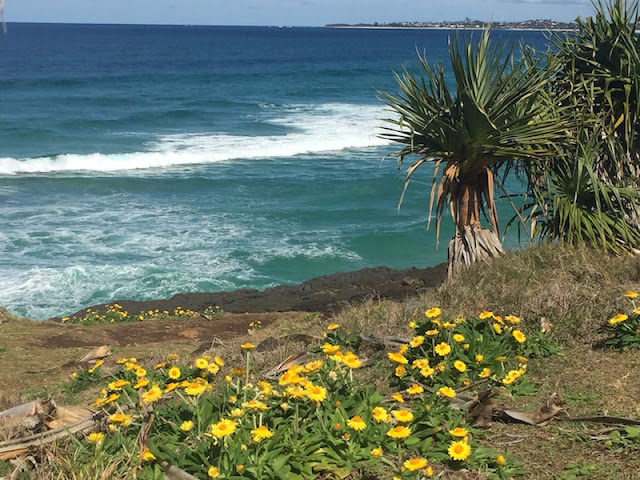 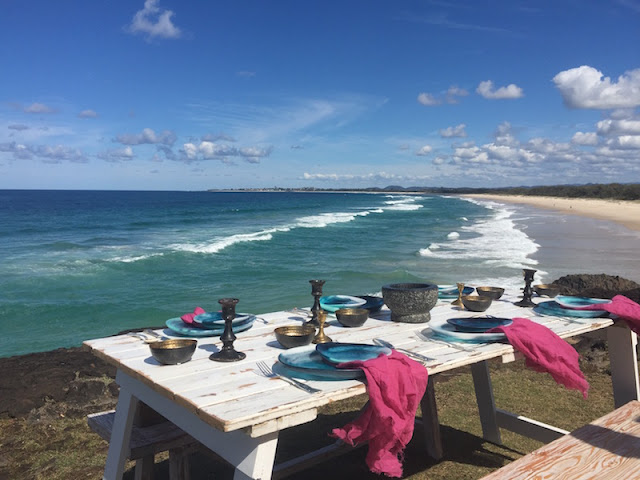 We soon discovered that it had been organised for a wedding photo shoot, shortly to take place. What a brilliant position.
I quickly came up with a plan for our Wednesday walk, especially when we spotted dolphins frolicking in the waves. Margot and Laurel were joining us the following morning for a coastal walk further south. We would surprise them with a similar setting.

Lugging the gear to the headland was heavy work, as it wasn't a short walk. 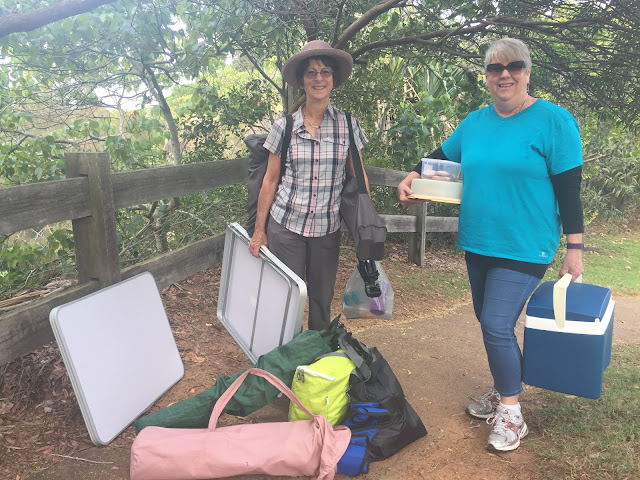 The look on Margot and Laurel's faces was ample reward for our effort, plus the dolphins and whales gave a spectacular performance until we left, a couple of hours later. We were oohing and aahing constantly. 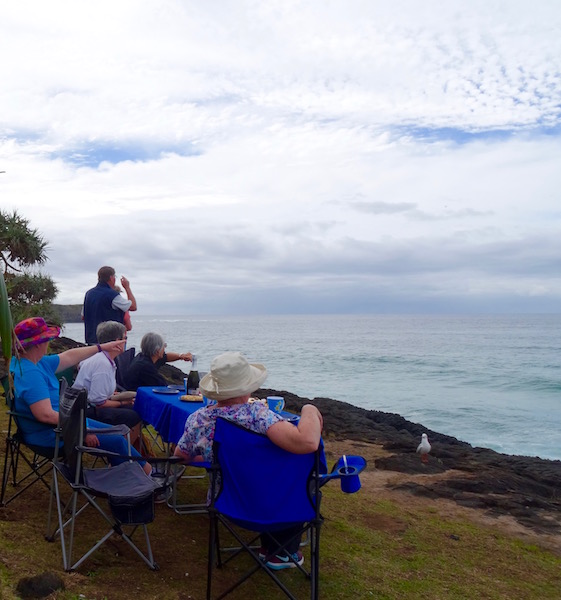 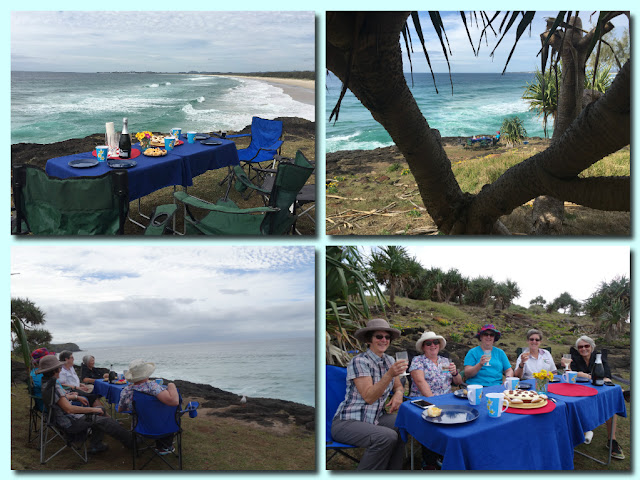 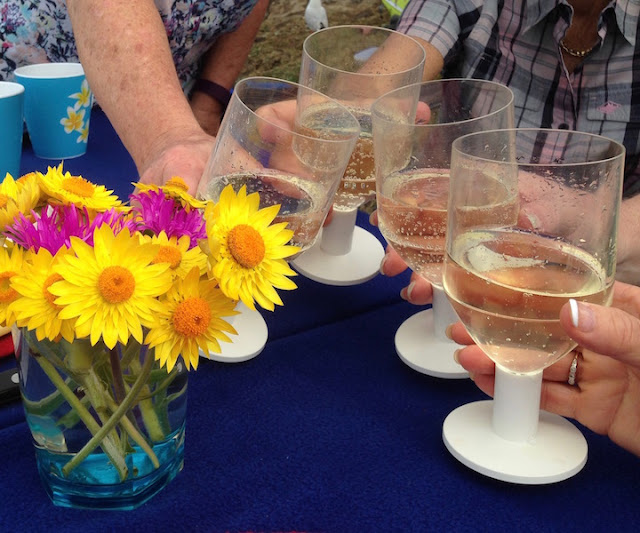 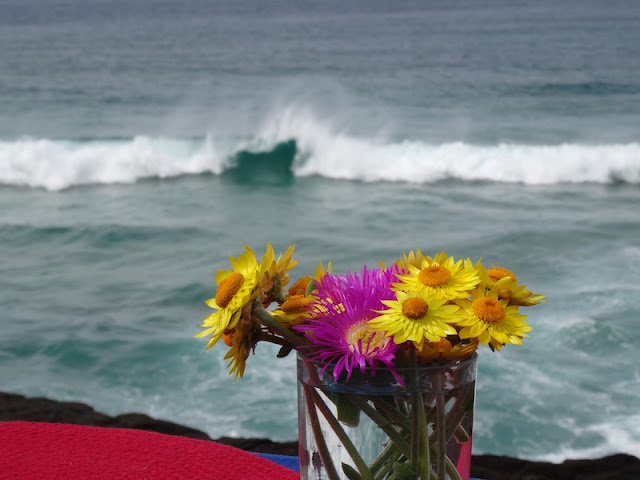 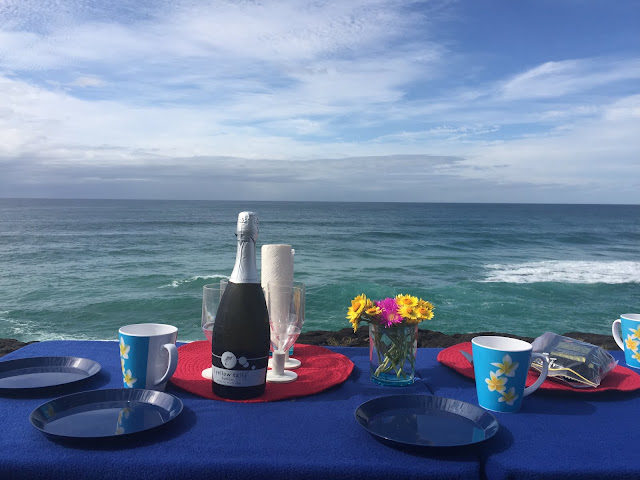 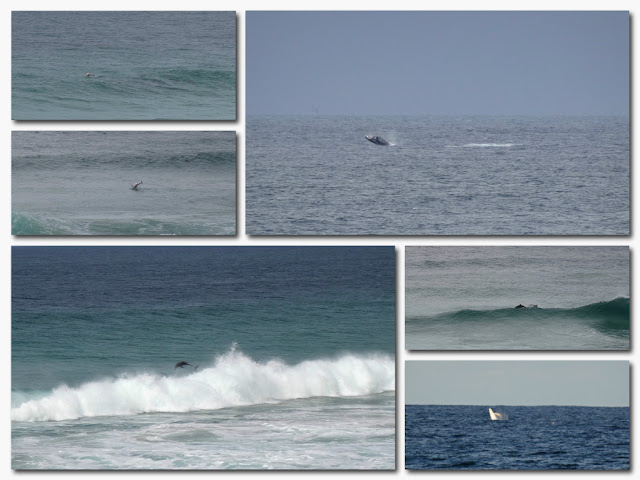 Our day wasn't one of complete idleness. Once we had farewelled Margot and Laurel, the 'happy campers' enjoyed walking the length of Fingal beach to the Tweed River mouth and back - 8 kms return.

A trawler setting out for their night's fishing. 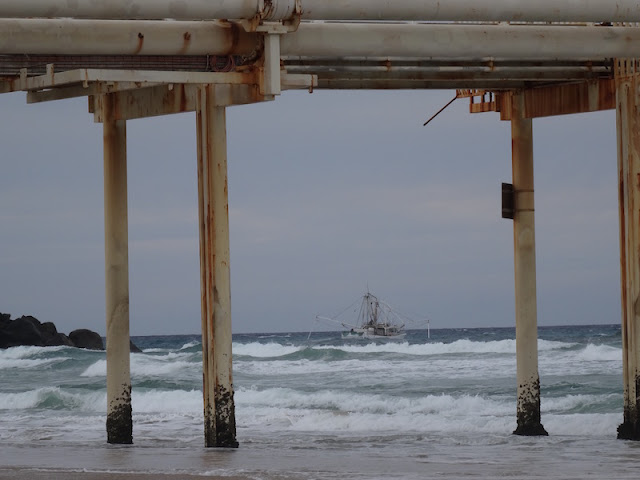 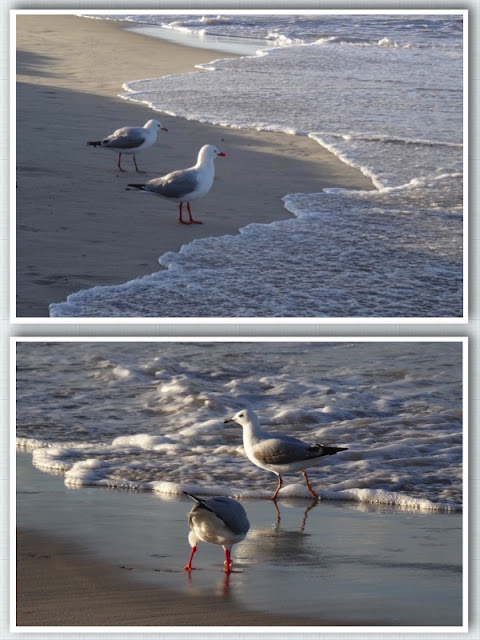 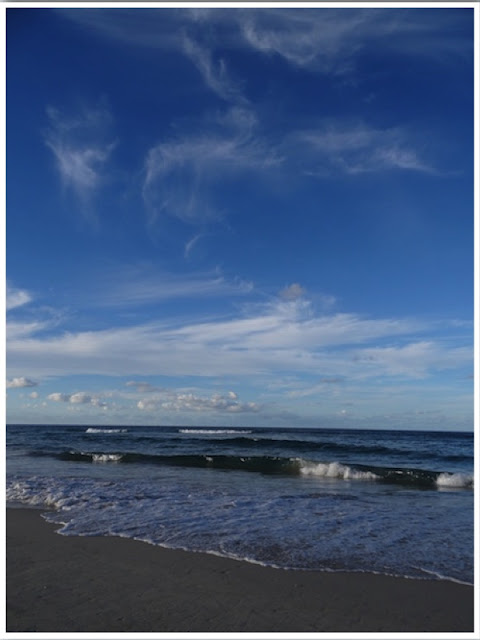 The following morning, it was with sheer joy, that I quietly unzipped my canvas window to watch the sunrise, without disturbing my friends. 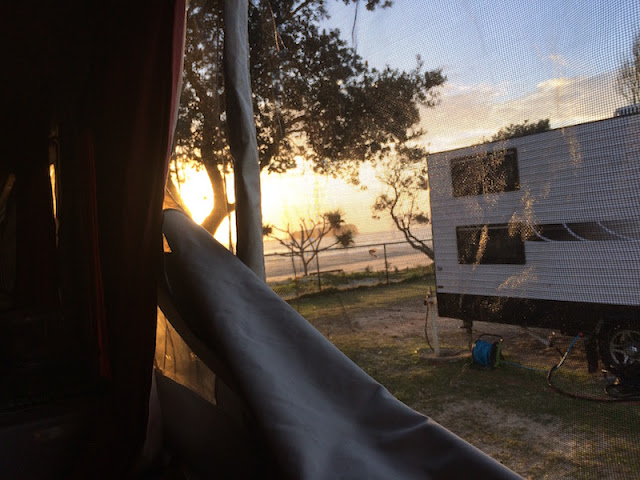 We allotted ourselves 2 hours to decamp, by the park's sheduled time of 12 pm. We were efficiency plus and were exiting after just one hour. I returned the keys to the office and was about to leave, when the receptionist held up a set of keys and asked me what they were! Alas I had given her the van keys. The abultion block key was safe and sound on its hook in the van. Much laughter ensued, however it wasn't too difficult to retrieve them.
Before driving home we pulled into a picnic area on the Tweed River, with a wonderful view of the hinterland and Mt Warning, for a coffee and early lunch. 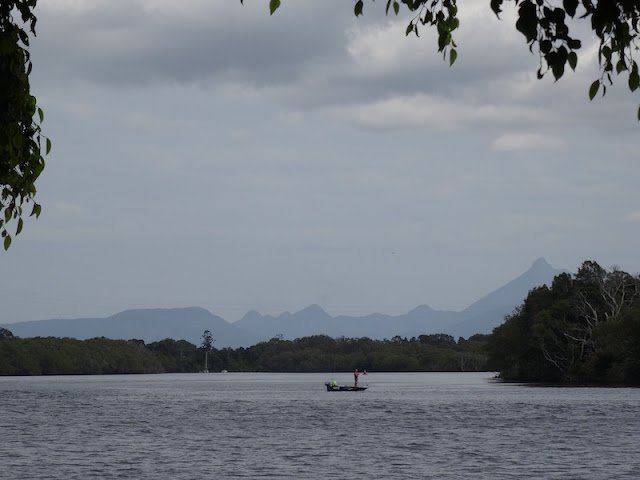 It was most certainly an extremely successful first outing with the van. I am now excitedly planning my next escape. I am so thankful for how these past days played out.

I woud love to read your comment.
Posted by Helen at 13:23