Our boat had docked in Breisach, Germany, at 3am. We woke to a wonderfully, clear, sunny hot day. After a guided walking tour to orientate us with its old town, we had the remainder of the day to wander and enjoy this pretty town. 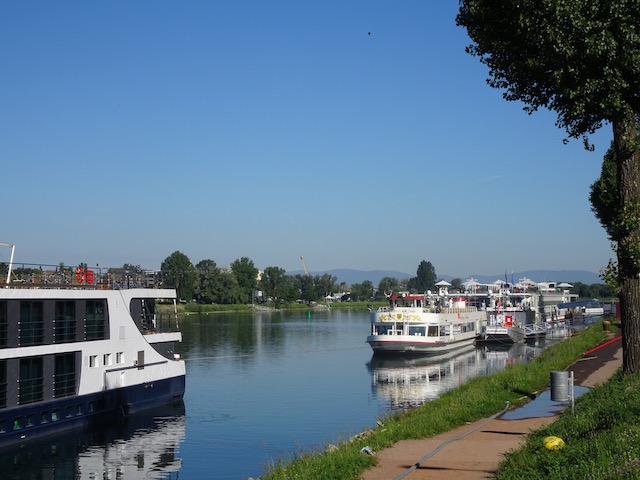 Dominating the skyline, was the beautiful 12th century, St Stephen's Cathedral and 2 preserved defence towers from the Middle Ages. 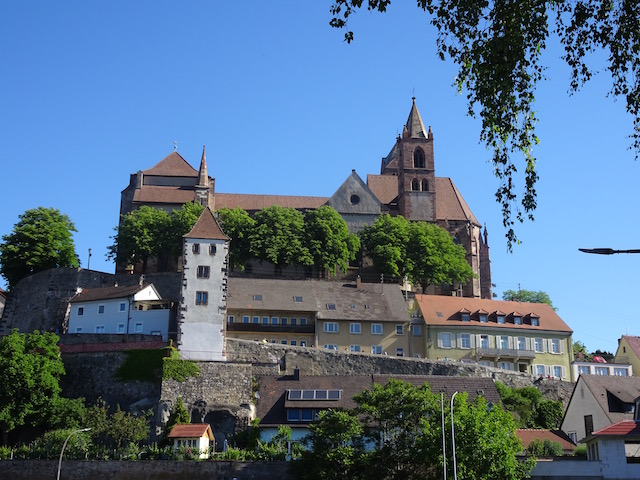 From this upper level, we had views across the Rhine to the Alsace wine growing region and turning round, we could see as far as the Black Forest. 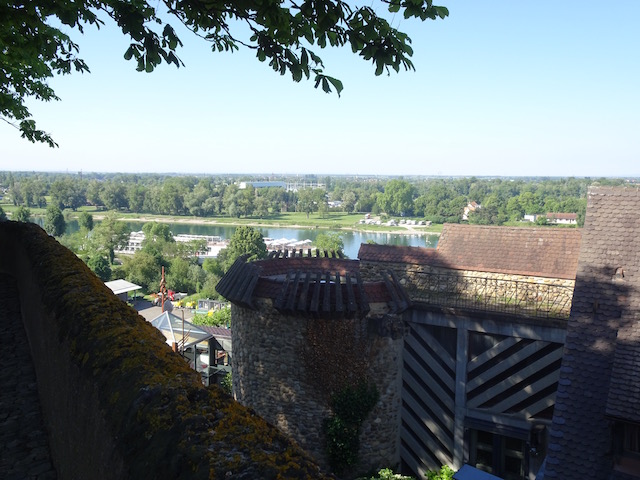 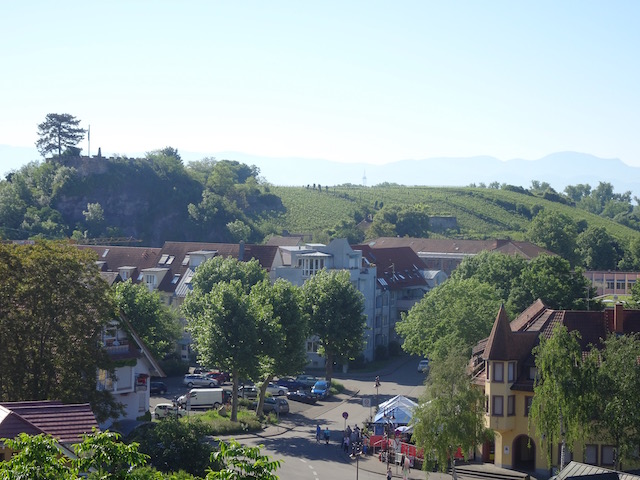 Breisach suffered frequent destruction through the ages. The coat of arms on the Town Hall give an indication of how many powers ruled from here. 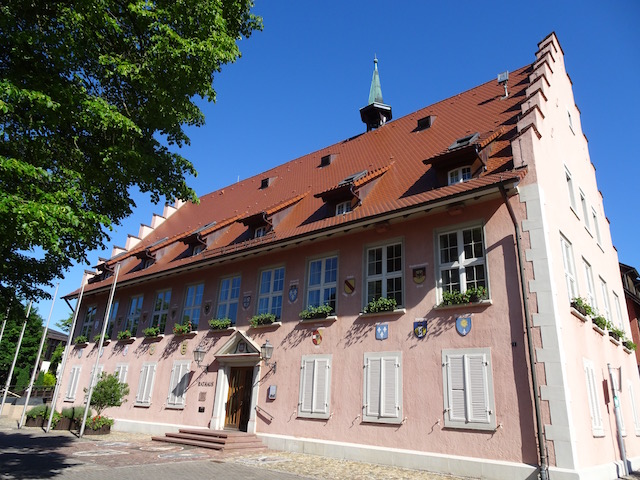 The Radbrunnen is within the fortress and housed a well shaft more than 40 m deep that supplied water, even in the longest siege. 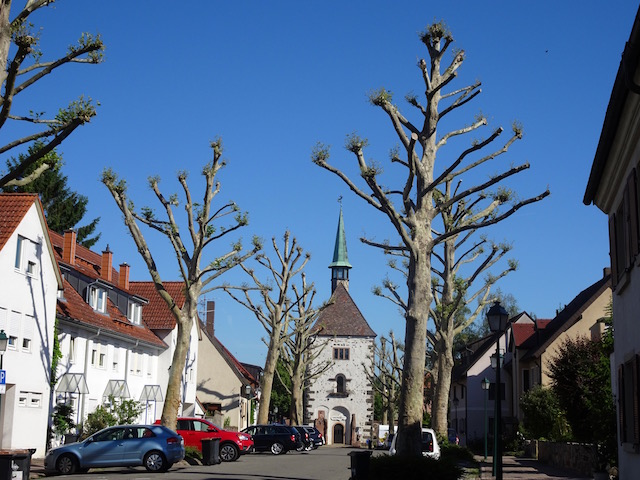 A modern artwork of what how the water was pumped is found on the back of the Radbrunnen. 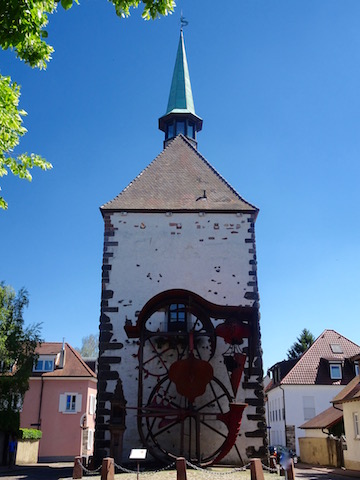 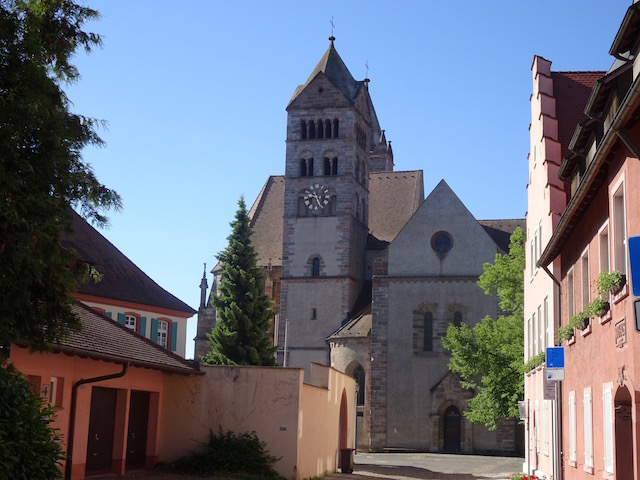 'The Bull and the Goddess' statue, by local artist, Helmut Lutz in 2000, commemorates the vote in 1950 to create a united Europe. 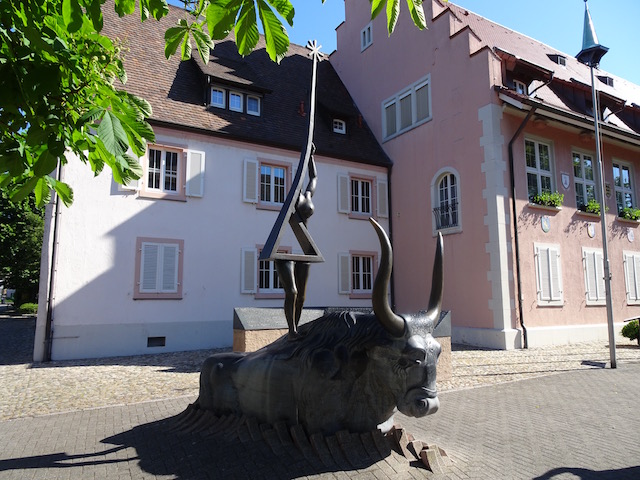 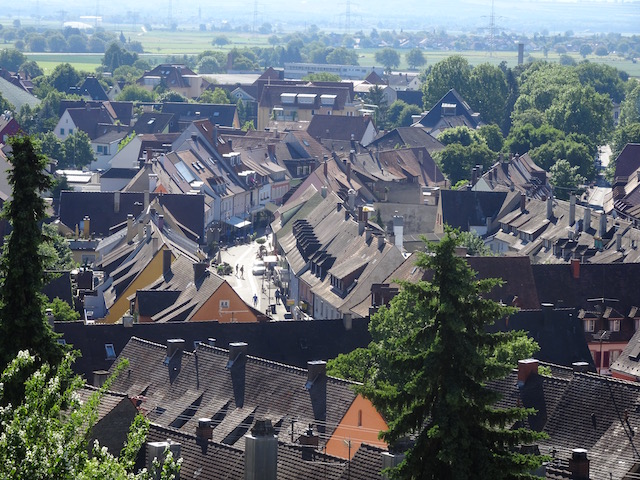 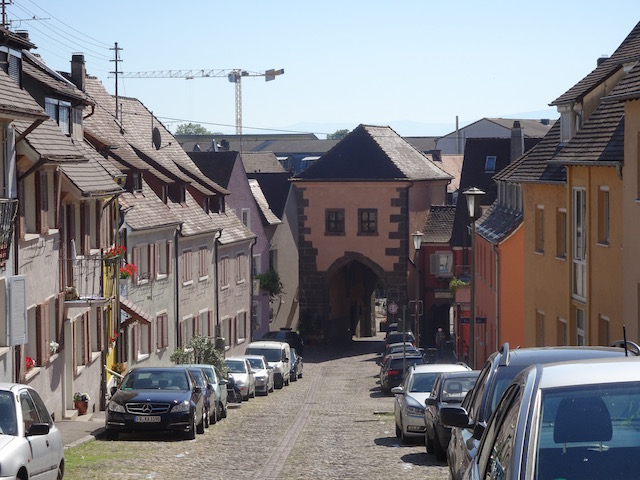 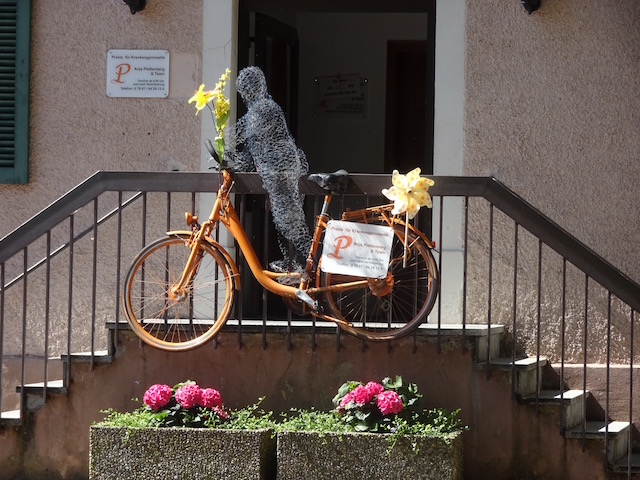 So close to the Black Forest, one just has to do a taste test. I can report that it was incredibly delicious. 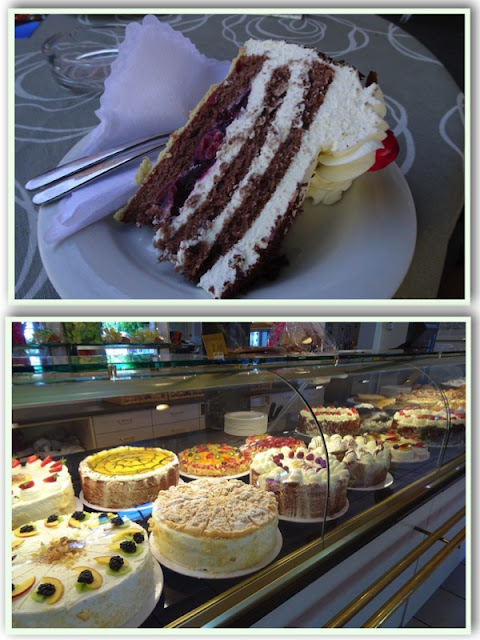 We climbed through vineyards to the Eckartsberg, which once housed a castle and a monastery. 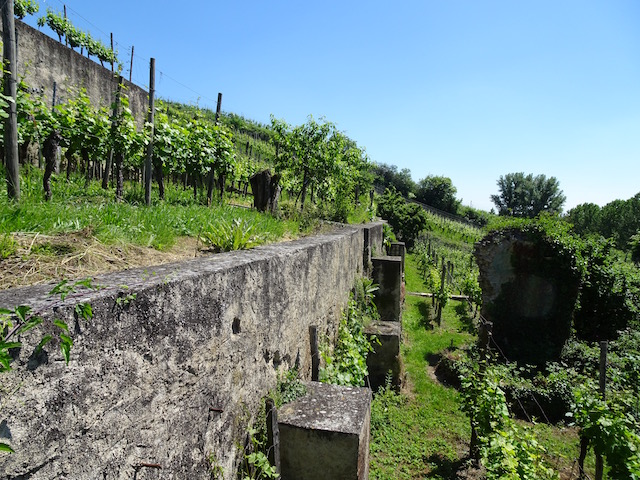 Site of the Eckartsberg. 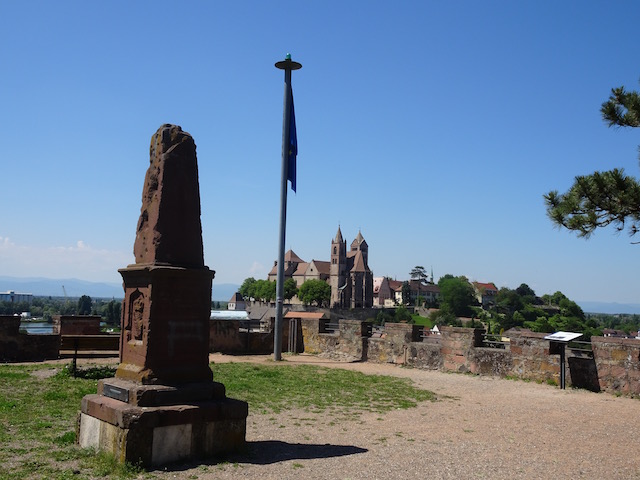 View from the Eckartsberg, back over the old town. 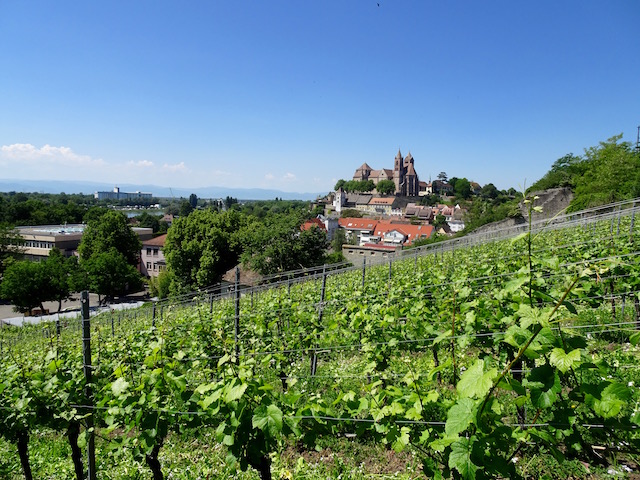 View in the opposite direction. 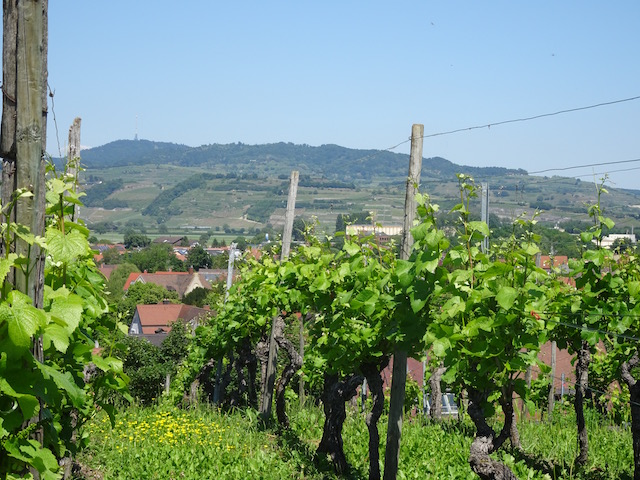 Our afternoon walk took us back up into the fortified town. In 2001, the artist K. Faulkner, created this mural of the Court of Peter von Hagenbach, 1474. 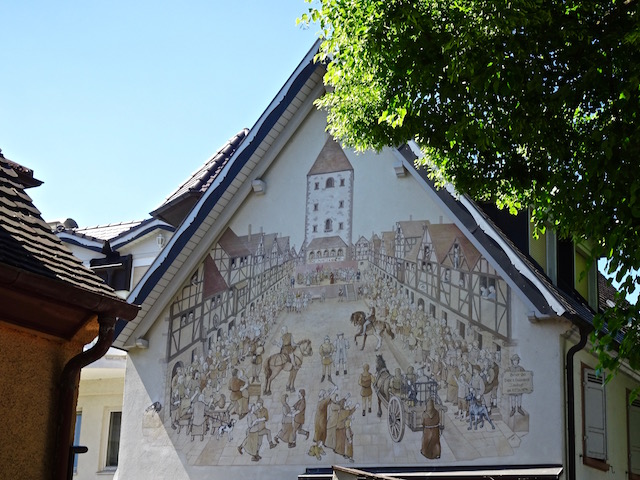 Path beside the river. 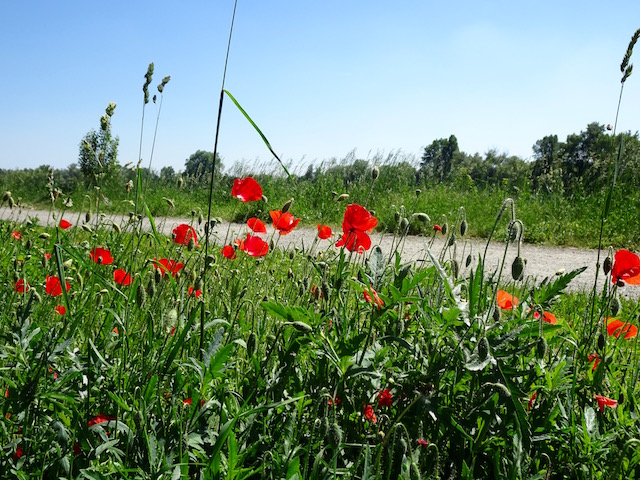 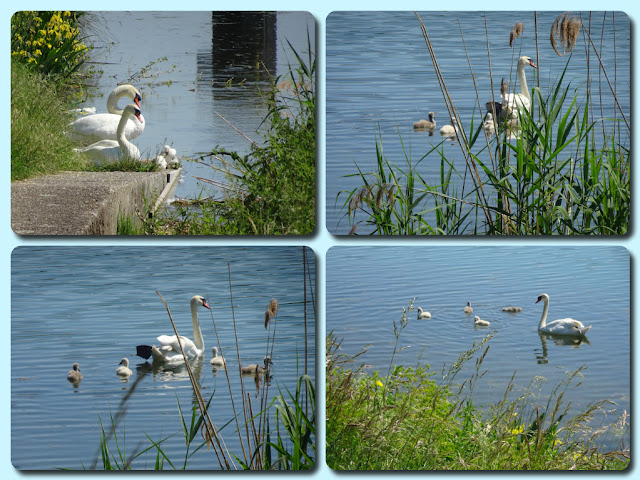 MS Monarch Baroness, set sail at 6.30pm. At 7pm we joined our wonderful new friends and waiters for our final dinner together. A fabulous evening ensued. 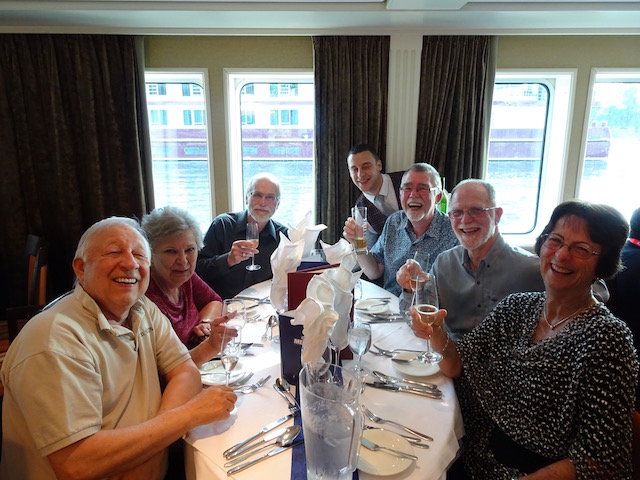 Baked Alaska is the traditional final night dessert. All the staff join in the parade. Serviettes are waved and many thank yous are said. 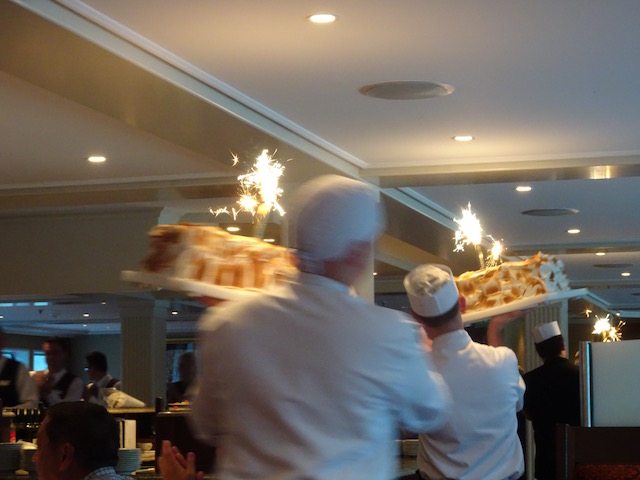 It was such a pleasant evening, that most passengers found themselves relaxing with a wine up on deck. The Rock and Roll entertainment in the lounge was ignored. 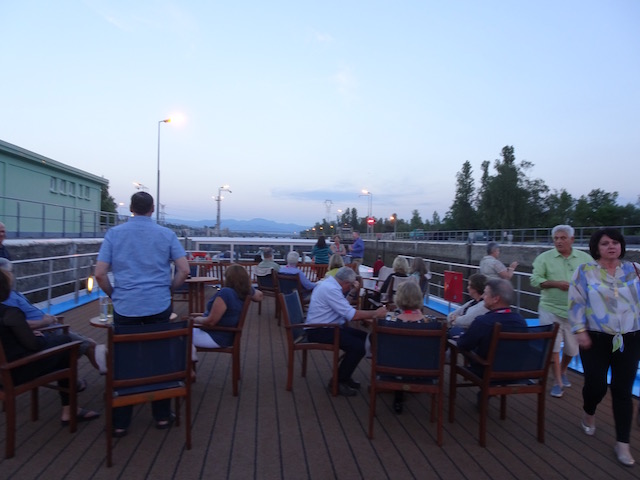 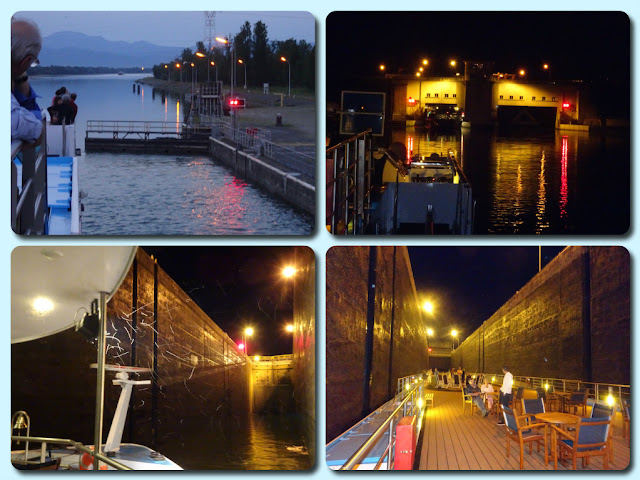 A gentle sunrise welcomed us to Basel. 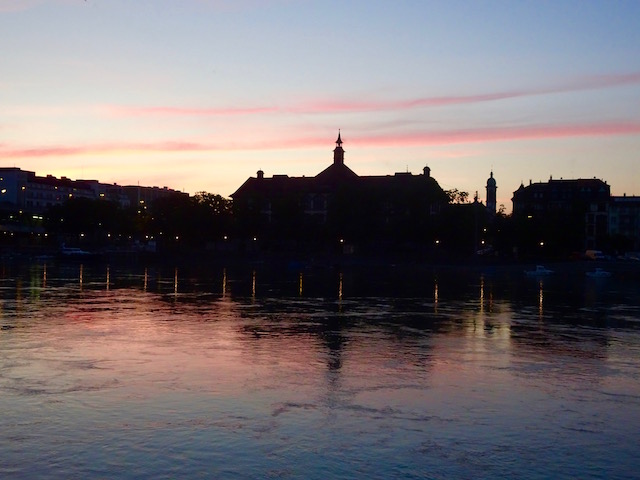 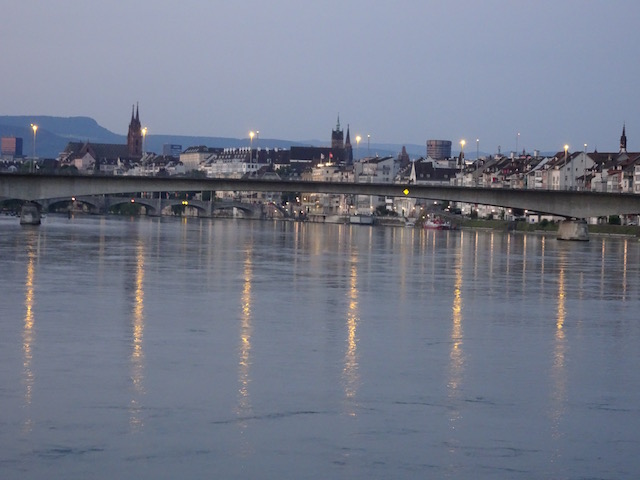 Our farewells had all been made by 8am and we set off to find our hotel, before collecting our luggage. As we returned, it was lovely to spot our ever so lovely Canadian friends, Ron and Dianne relaxing on shore, before they had to travel to the airport. 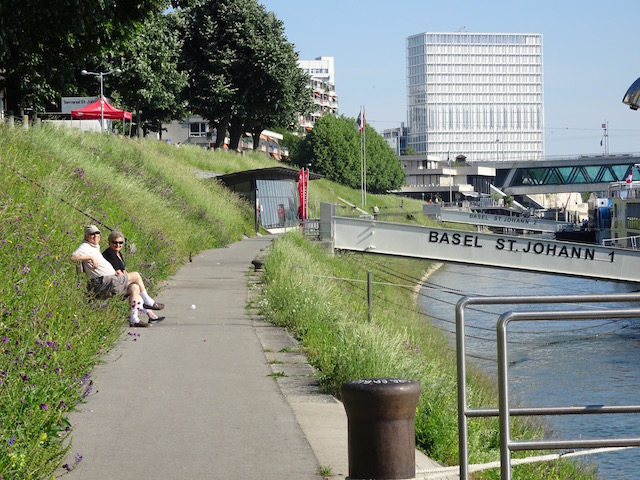 My husband and I had very fond memories of our October 2008, Rhine Cruise. We are so grateful to have had the opportunity to relive those memories during this early spring season. We cannot recommend river cruising enough. They can be incredibly expensive, but we were fortunate to have discovered Gate 1 Travel and their excellent deals.

I would love to read your comment.
Posted by Helen at 21:21