Scary, but beautiful for my husband and I, but frightening and devastating for far too many people.

Cyclone Debbie crossed the Whitsunday coastline last Tuesday, wrecking havoc in this tropical sugar cane and tourist area. Not content, her low then spent the next 48 hours travelling south, dumping unheard of rainfall totals in a very short time span, far south of the Queensland border. Flood levels were as high or higher than the records set in the 1974 flood disaster. This time however, the force of the water was far greater, because of the short time in which the rain had fallen. Footage of the devastation is heart breaking. Thankfully the death toll stands at only 6.

The rain started falling here, about 9 pm Wednesday night. By 6 am 50 mm [2inches] were in the gauge. Then followed a day of consistent, but seemingly not worrying falls. There was even a window of opportunity to go splashing through the puddles and take photos of the ducks and mushrooms. We emptied the gauge about 10 pm, as the rain had ceased and the radar showed the low had travelled further south. Another 125mm [5 inches] had fallen. We were not too concerned even with the flood warnings being issued.

At 2 am, I happened to wake and took a walk outside to see if the golf course ponds were rising. The water was halfway round the 6th green below our house. We were still not concerned as we had watched this happen in the 2013 flood, which stopped 6 m from our fence line. An hour later, when I looked out again, the green was completely covered. Not good. At 5.30 am the water had reached the 2013 peak level. Half an hour later it was entering our garden, but the scene before us, as the sun rose, was quite beautiful and tranquil. 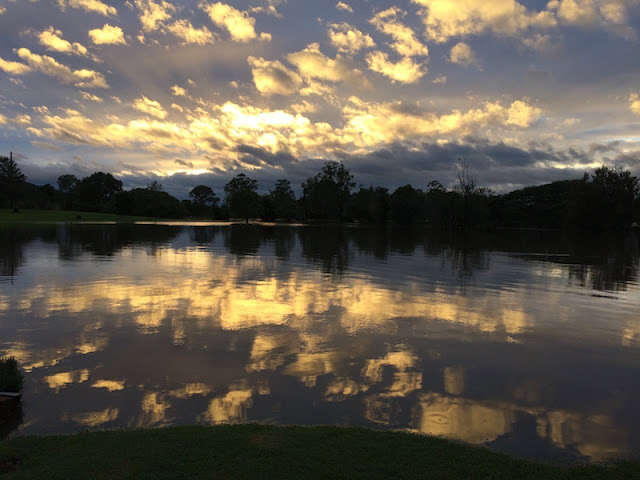 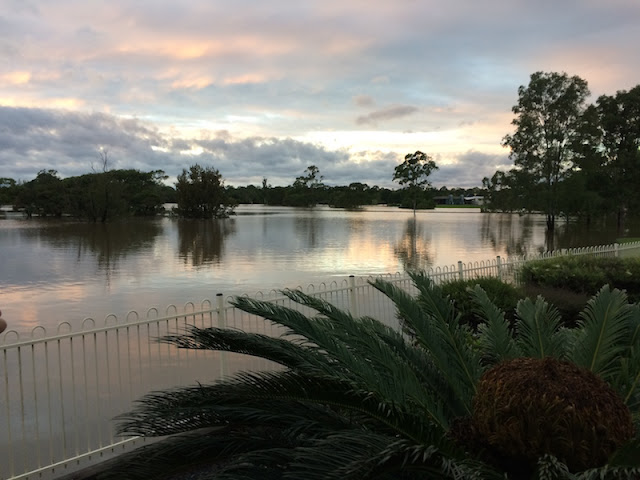 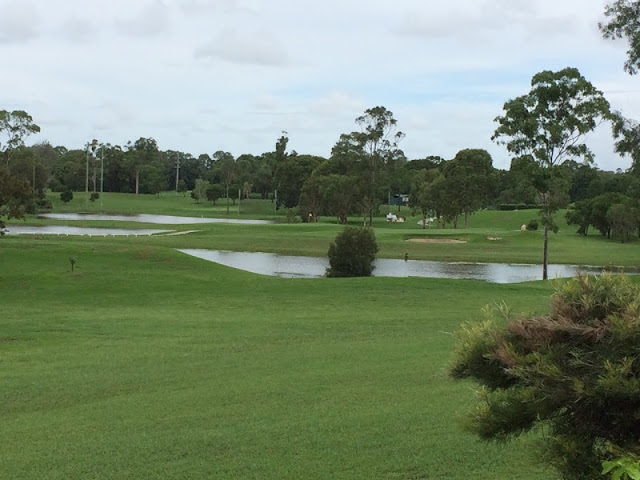 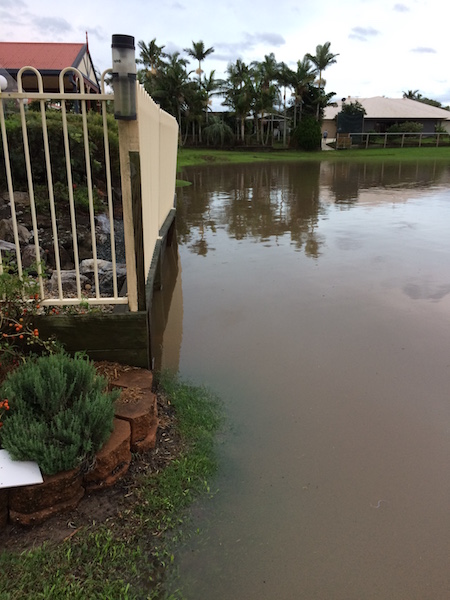 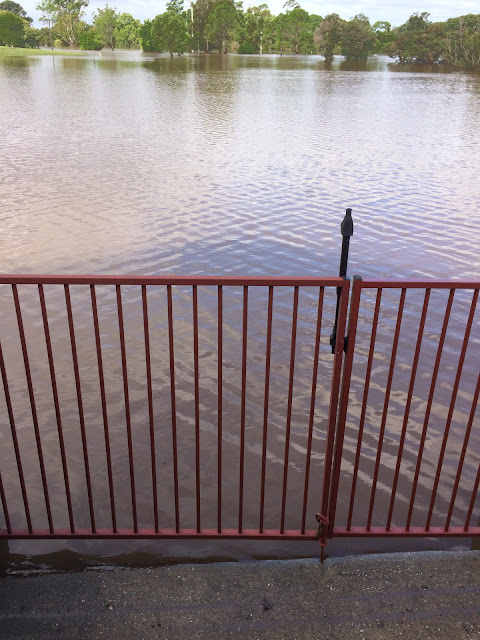 As the morning went on, we learnt that the head waters of our rivers had seen the following falls. It was time for action. 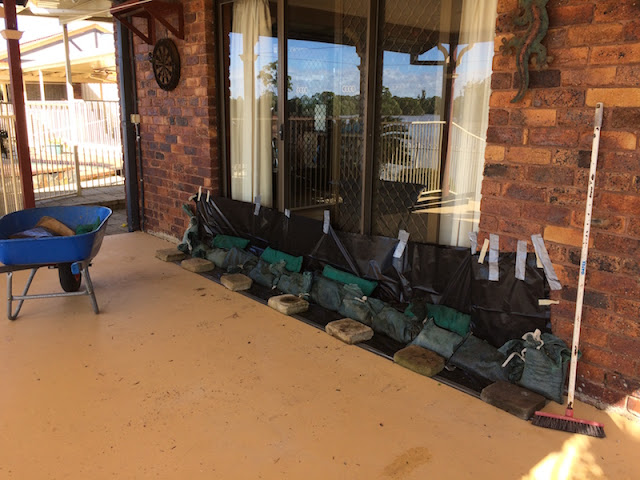 By 10.30 we had done as much as we could to stop the water entering, so sat with a coffee and watched it slowly rise, wondering when it would stop. 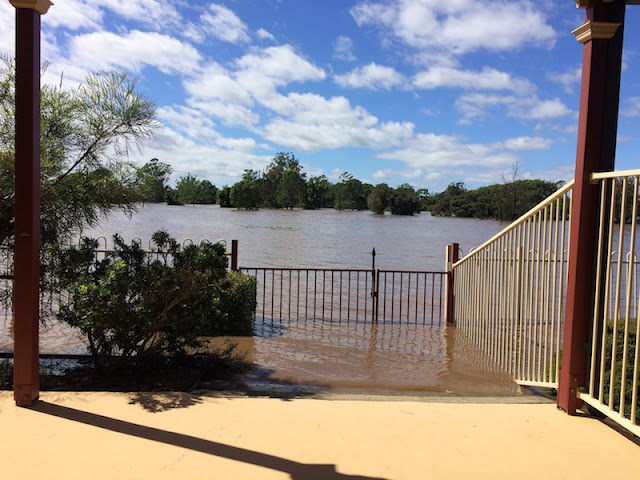 Our neighbours home was built higher than ours. This was as high as the water came into their garden. 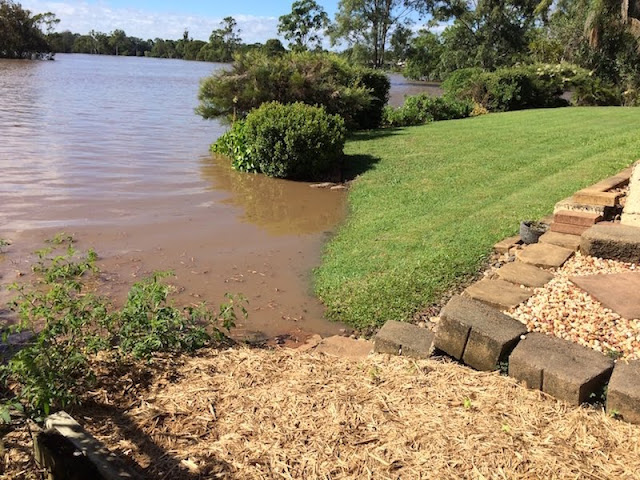 At 11 am the water had come within 15 cm of our patio and thankfully this was its peak.  It was to take 2 days to completely recede. 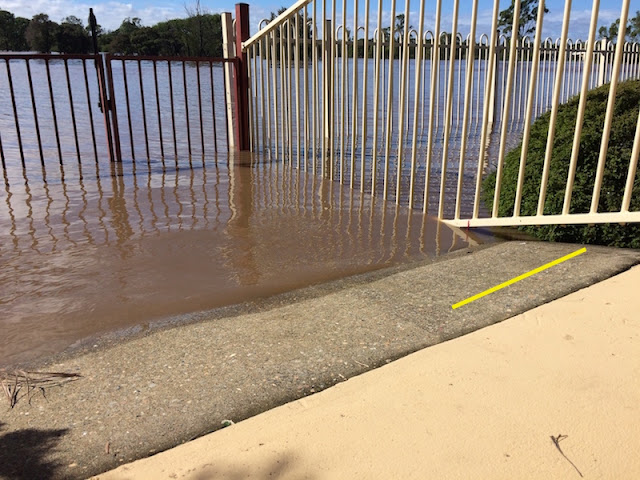 The view from our kitchen and just outside the lounge. 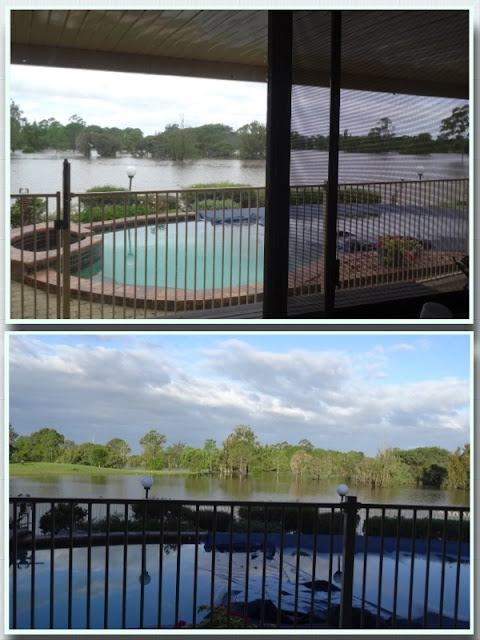 The late afternoon light gave lovely reflections. At this time the water was just below our fence line. 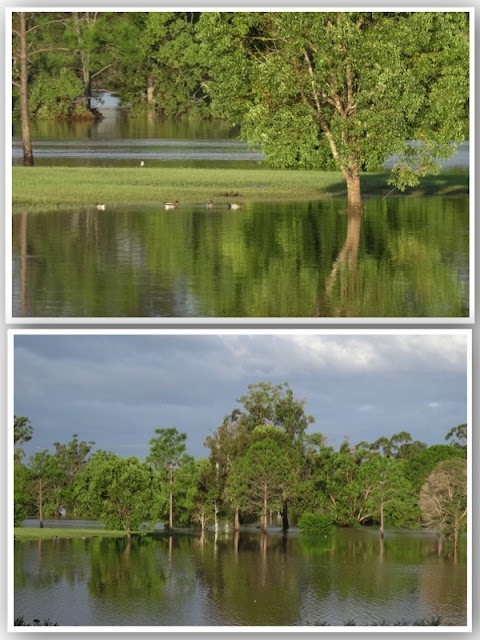 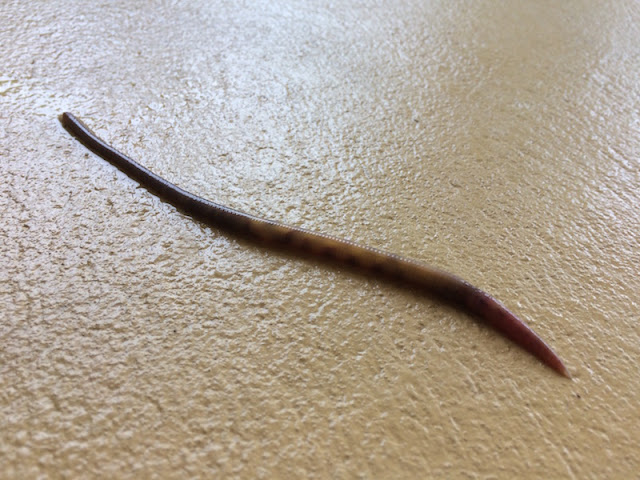 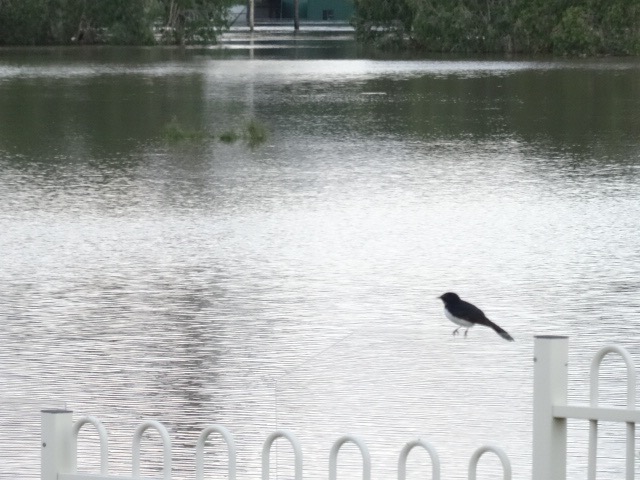 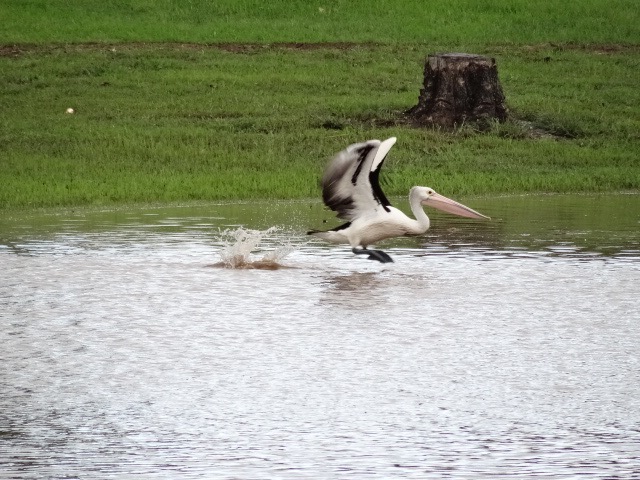 As we went to bed the level was still falling, but I did wake up a couple of times to check that the high tide hadn't reversed this progress.

On Saturday morning at 5.30 am, the water was off, but still surrounding the 6th green. 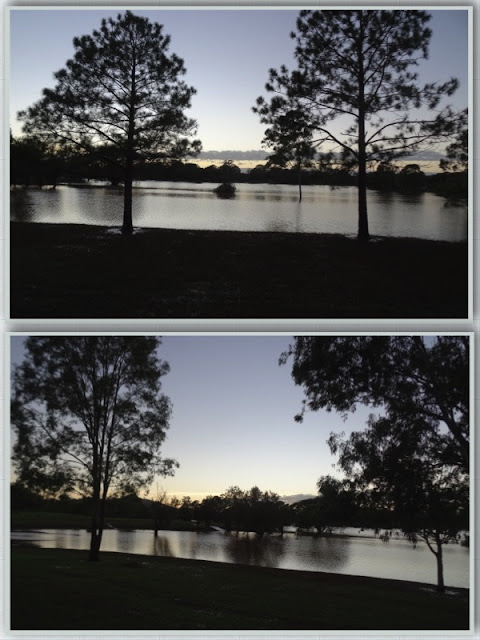 The sun began to rise spectacularly. 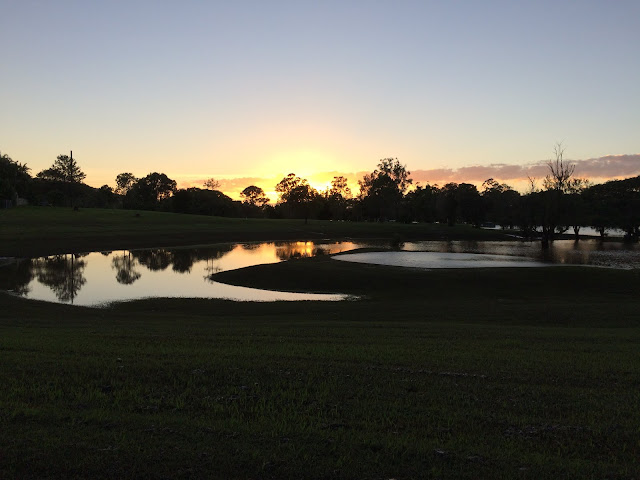 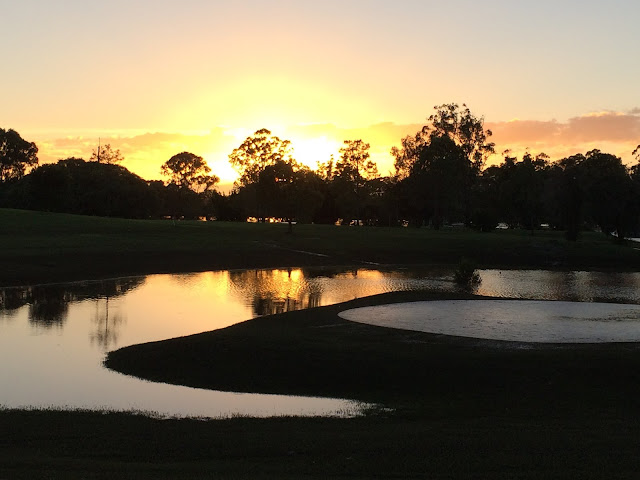 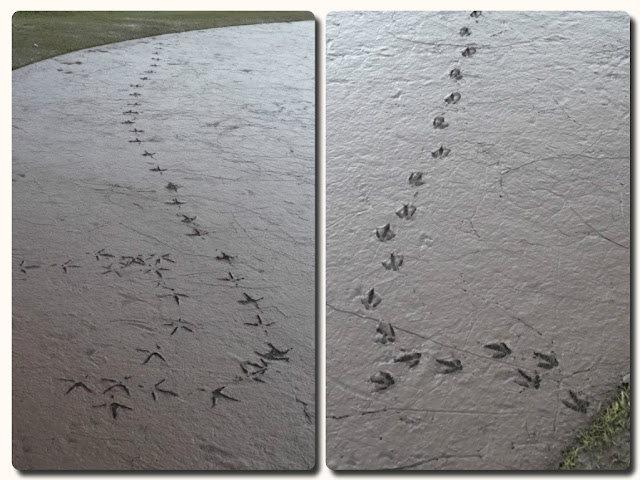 This bird is the Spoonbill. Watch the video to understand how it got its name. I also love the sounds of other birds that I have inadvertently managed to capture in the background. Turn your sound up.
The last time the Spoonbill  visited was the 2013 flood and its feeding habit kept me amused then and again now. 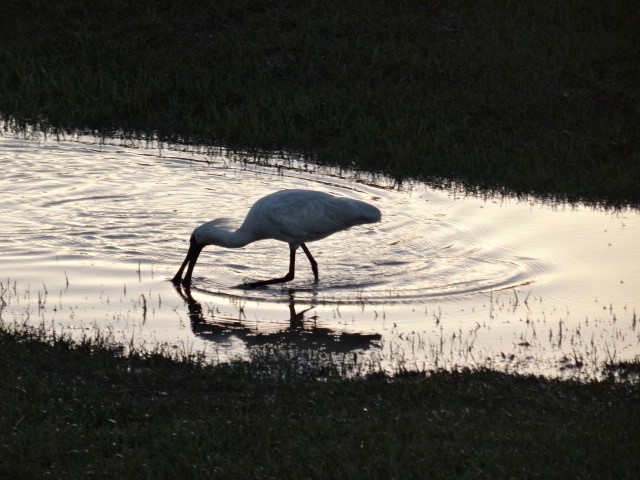 The Ibis is a regular visitor. 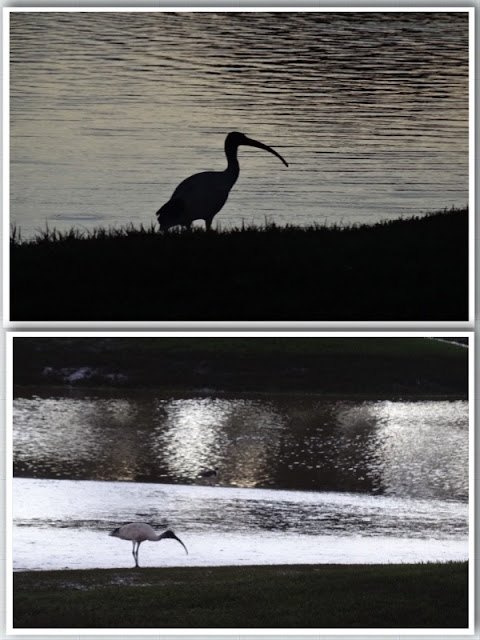 Mid Saturday morning it was coffee time again and we witnessed the arrival of the 'Save the Green, Brigade.' A generator, pump, high pressure hose and man power, managed to clear the green of its mud in about 45 mins. Only 17 left to go! Bottom right are the 4th and 9th holes cleared amidst the remaining mud on Sunday. 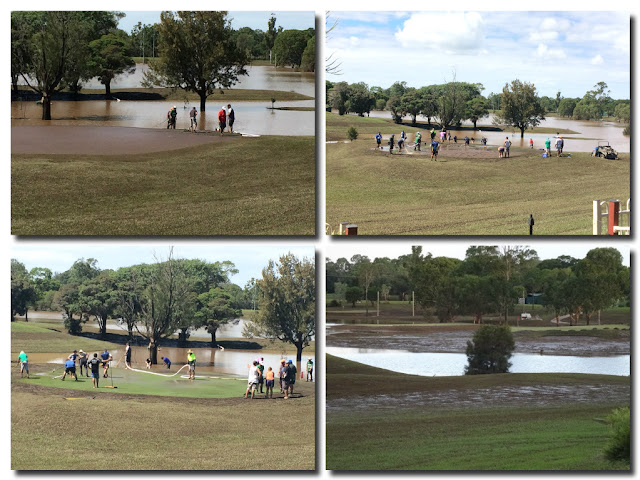 Late Saturday afternoon the water still had a long way to fall. 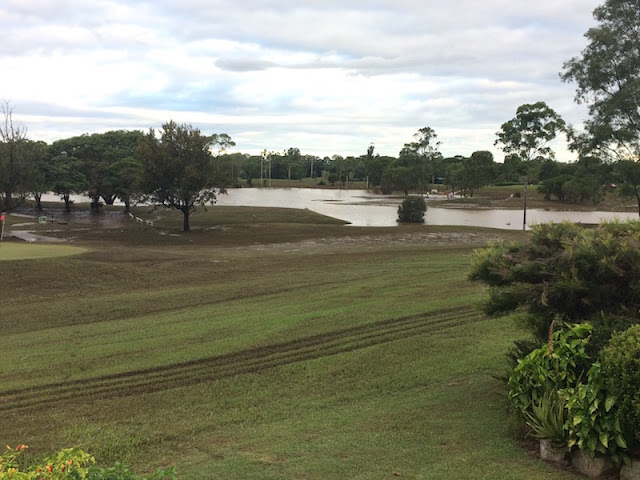 Sunday morning and all clear. It is expected that the golf course will be closed for a good 3 weeks. 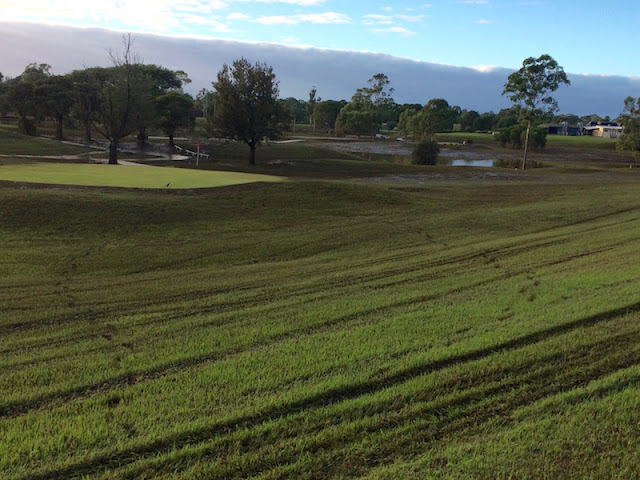 In Central Queensland, the flood levels are still peaking in the city of Rockhampton on the Fitroy River, a huge river system that has seen its flood water take 5 days to reach the city. 1800 homes will be inundated over several days because of it slow progress across the flat plain of the area. Everywhere else the heart break of cleaning up has well and truly begun.
We feel incredibly fortunate to have been spared this pain. When watching all the reporting, I am amazed at how the Aussie ethos can manage to come through - "She'll be right mate." I sincerely hope so, but it will take time.

I would love to read your comment.
Posted by Helen at 14:03